"Never has a government spent so much to achieve so little," said Andrew Scheer of the Trudeau government at the Ontario PC's annual policy convention 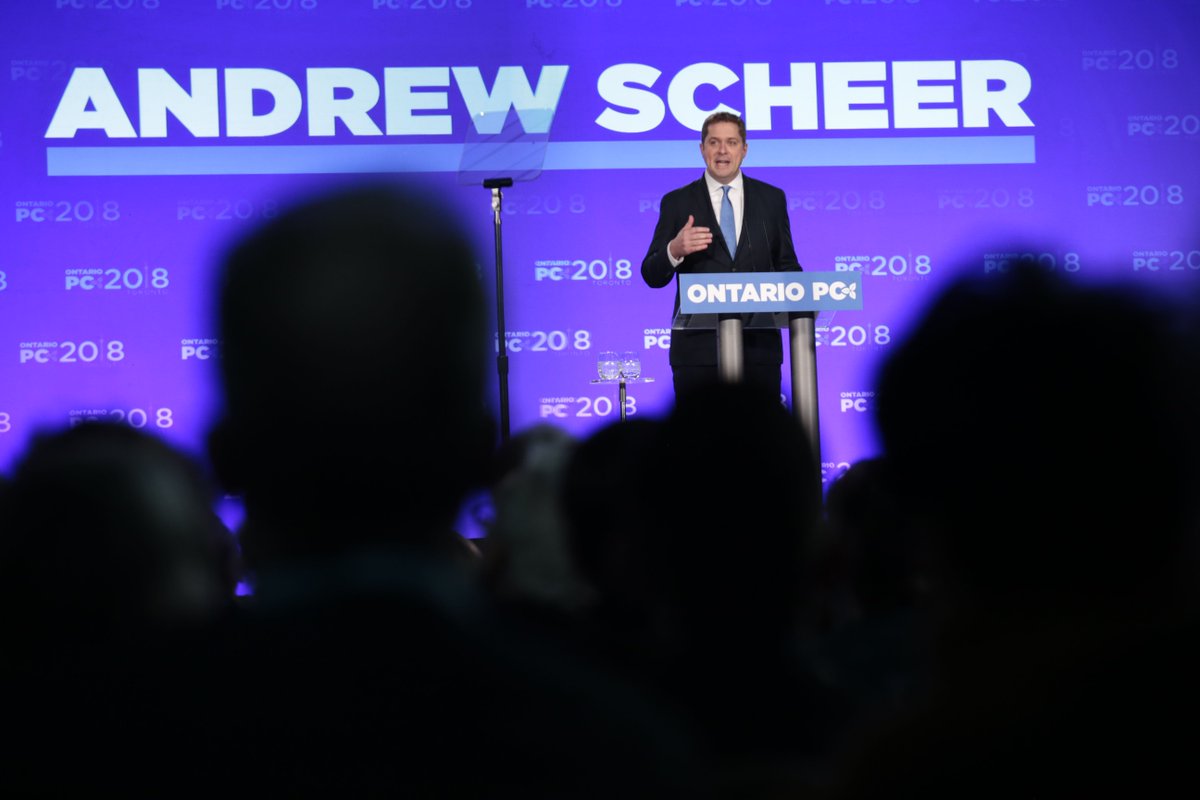 In a keynote address to around 1,000 party delegates, Scheer stressed that while the provincial Progressive Conservatives had defeated the Ontario Liberals, their work to return the federal Tories to power in next year’s federal election is still to come.

Scheer hammered Trudeau for a ballooning federal deficit and stressed “fiscal sanity” needs to be returned to Ottawa.

“Never has a government spent so much to achieve so little,” he said. “Justin Trudeau’s never had to worry about money, so it’s no wonder that he doesn’t worry about yours.”

Scheer also slammed Trudeau for imposing a federal carbon tax on the provinces—something Premier Doug Ford has vowed to fight in court—saying Trudeau’s carbon plan excludes big polluters and raises the cost of living for regular people and businesses.

“To Justin Trudeau, you are the enemy,” Scheer said. “The commuter, the office worker, the hockey mom, the retired senior: those are the people that are being dinged by this carbon tax. That’s why it’s unfair. Everyday Canadians should not be forced to pay more for everything.”

The prime minister’s office said Scheer’s Conservatives have been “fixated” on Trudeau for years.

Ontario’s Progressive Conservatives are meeting for their first convention since the party swept to power in the province’s spring election, but the celebration comes at a time when the new government is weathering a series of political storms.

Party members from across the province have gathered at the Toronto Congress Centre to debate policy, celebrate the June election win and select a new president and executive members.

Premier Doug Ford opened the event Friday night with a speech outlining his new government’s accomplishments since being sworn in and lauding his team.

“The Ontario PC Party is stronger than ever,” Ford said as the party’s caucus joined him on stage. “My friends, a new day has dawned in Ontario.”

The convention comes at the end of a week which also saw the Ford government deliver its first fiscal update, while also grappling with the release of former party leader Patrick Brown’s tell-all book.

In the biography, Brown portrays himself as a victim of a conspiracy led by senior party officials opposed to what he calls a moderate brand of conservatism.

The book also makes allegations against several key members of Ford’s government, including Finance Minister Vic Fedeli, whom Brown says faced allegations of sexual misconduct when he was party leader.

Ford defended his finance minister this week, saying the allegations against the veteran legislator are nothing but a “disgusting smear campaign.”

Fedeli, meanwhile, called the allegations “categorically false and without any merit,” and said he was prepared to take legal action.

Brown himself resigned as leader in January amid sexual misconduct allegations he continues to deny.

It’s been a tumultuous month for the new government. In early November, Economic Development Minister Jim Wilson resigned from cabinet and the party caucus after an allegation of sexual misconduct was levelled against him. That same day a key adviser to Ford, Andrew Kimber, also resigned after multiple staff members came forward with allegations of sexual misconduct against him.

The convention continues Saturday with a fireside chat with Ford during the evening.