The Tories want to look at alternative avenues for travel between Windsor, London, Kitchener, and Toronto 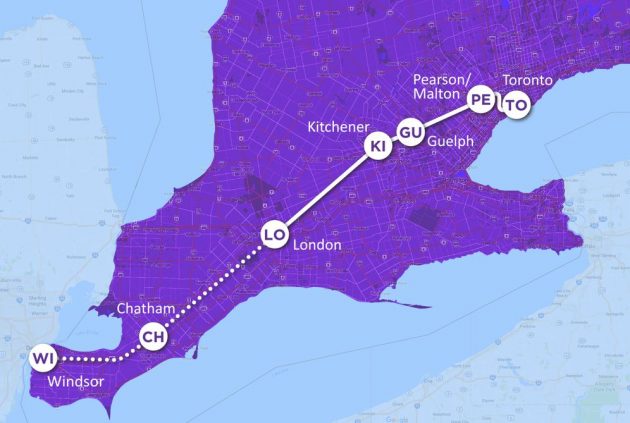 TORONTO – Ontario is pausing all capital funding for a proposed high-speed train corridor from Toronto to Windsor, Ont., a move opposition critics says will derail the project.

Transportation Minister Jeff Yurek said Monday the government is facing fiscal challenges and wants to ensure the multibillion-dollar project is value for money.

The decision on high-speed rail comes in the Tory government’s first budget, a spending package which pegs the province’s current deficit at $11.7 billion and debt at $343 billion.

Late last year, the Tories expanded the scope of an environmental assessment of the project to determine if other options would work better, including increased Via Rail service, more bus capacity or improved highway infrastructure.

The previous Liberal government had planned to connect Toronto to London, Ont., by 2025 and extend the line to Windsor, Ont., by 2031.

The Liberals promised that trains would travel up to 250 kilometres per hour, cutting travel times between Toronto and Windsor from four hours to two.

Yurek said the government will push ahead with the planned environmental assessment and continue the review of all transportation options for the region.

The Tories say they will also introduce a transportation plan for Southwestern Ontario in the fall of 2019.

“We’re going to be looking at all of the other avenues for travel between Windsor, London, Kitchener, and Toronto,” Yurek said.

The minister said the government can’t brush aside the concerns of rural residents who said the project would have economic and environmental impacts on their communities.

“We want to make sure that people who are effected by this build had their voices heard,” he said. “The previous government ignored the voices of anybody outside of urban areas.”

The Tories’ budget highlights the concerns of the farming community, which warned a physical barrier necessary to build the line would “eliminate countless hectares of prime agricultural land”.

“That project is dead in the water as far as the Conservatives are concerned,” she said. “They’ve decided that they don’t want to have anything to do with planning for the future of transportation in Ontario and I think that’s irresponsible.”

“(The government) may have talked a lot about transit in Toronto, but we heard nothing about transit outside of Toronto,” he said.

Interim Liberal leader John Frasier said the Tories are ignoring what could be an important economic opportunity for the region.

“I’m not sure Windsor is on this government’s map,” he said. “That high-speed rail line is about strengthening our economy.”