The Ontario government committed $311,200 in fresh funding to the project, which is expected to fuel growth at the small-town dairy 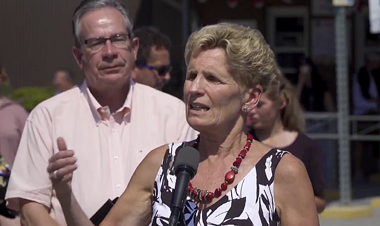 Ontario Premier Kathleen Wynne was at the small-town dairy Aug. 2 to announce $311,200 in funding for the company’s new refrigeration facility, which is expected to be completed this fall.

The project will create 10 new jobs in Bobcaygeon—northwest of Peterborough, Ont.—and aims to fuel both domestic and international growth at the dairy, which is increasingly known for its ice cream.

“Our new state-of-the-art refrigerated and frozen distribution facility in Bobcaygeon will help take our company to the next level by growing our presence and exploring new product lines to better serve our valued customers in Ontario and beyond,” Blake Frazer, the company’s vice-president and general manager, said in a statement.

The province said its contribution will cover four per cent of the total project costs, while the company will pick up the tab for the rest of the approximately $7.8 million expansion.

Along with ice cream, Kawartha Dairy makes milk and butter. The 80-year-old company sells its products through nine retail locations and at a number of large grocery chains.