Ontario to give Chrysler $85M to expand Windsor minivan plant

The money is destined for the plant where Chrysler recently added added 1,200 new jobs on top of its 4,000 existing positions 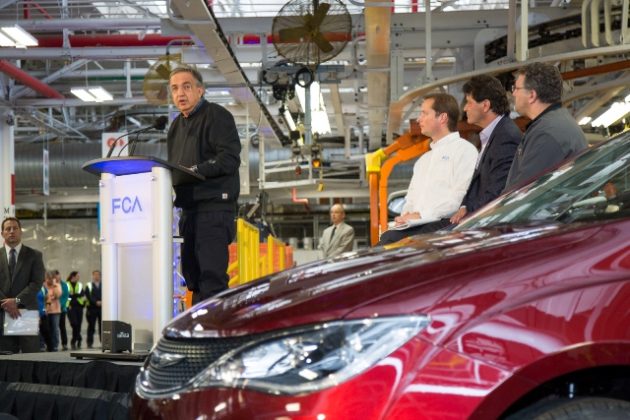 FCA chairman and CEO, Sergio Marchionne, speaking to employees at the official launch of the all-new 2017 Chrysler Pacifica in Windsor, Ont. plant May 6. PHOTO: FCA

TORONTO—The Ontario government will provide more than $85 million to Fiat Chrysler for an expansion of the automaker’s minivan assembly plant in Windsor.

The sources said the funds will be used to upgrade the assembly plant and to help finance a project at the Fiat Chrysler Automotive Research and Development Centre in Windsor.

Premier Kathleen Wynne is expected to make the grant announcement at Chrysler in Windsor on June 15, before crossing into Detroit to meet with Ford Motor Co. executive vice president Joseph Hinrichs and Michigan Governor Rick Snyder.

The eight-passenger Chrysler Pacifica minivan produced in Windsor will be available in two plug-in hybrid electric models that the sources said align with the government’s goal to reduce greenhouse gas emissions to fight climate change.

Fiat Chrysler Automobiles withdrew a request for $700 million in provincial and federal funding in 2014 after former Ontario Progressive Conservative Leader Tim Hudak urged the government not to give in to the automaker’s “ransom” demand.

The company complained about being used as a “political football,” but in 2015 announced it would invest $2 billion to retool its Windsor assembly plant.

The announcement of more auto sector jobs in Windsor follows last week’s announcement by General Motors that it was looking to hire up to 750 engineers and would open a new software centre to help develop self-driving cars.

Ontario’s Liberal government has a long history of providing money to automakers, and teamed up with the federal government in 2009 to contribute $10.6 billion to Chrysler Canada and GM Canada to keep them afloat during the recession.

Ontario sold its GM and Chrysler shares last year, and said it gained about $1.1 billion on its original $4.8 billion bailout package to the two automakers.

The province gave Toyota a $42.1 million grant in 2015 for upgrades at its Cambridge assembly plant and to add a new line at its assembly plant in Woodstock.

Honda got a provincial grant of up to $85.7 million in 2014 to improve operations at its assembly and engine manufacturing plant in Alliston.

Ford of Canada got $70.9 million in 2013 to turn its Oakville assembly plant into one of the most advanced automaking operations in the world.