One of Bombardier’s largest CSeries customers files for bankruptcy protection 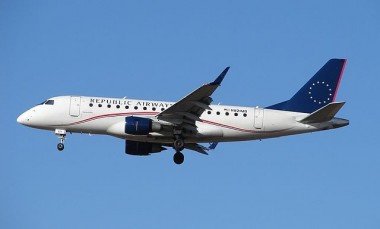 MONTREAL—The parent company of Republic Airways, one of the largest customers for Bombardier’s CSeries aircraft, filed for bankruptcy protection Feb. 25 in the United States.

Indianapolis-based Republic Airways Holdings Inc. said it and certain subsidiaries filed for relief under Chapter 11 in the U.S. Bankruptcy Court for the Southern District of New York.

The airline, which provides regional service for larger U.S. carriers, said its operations will continue as normal while it restructures its finances and contractual relationships.

Republic chairman and CEO Bryan Bedford said the company has attempted over the last several months to restructure its operations to address a loss of revenue from the grounding of aircraft due to a shortage of pilots.

The airline declined to comment on the status of its CSeries order.

The filing could represent a further blow to Bombardier, which has struggled to sell the new commercial passenger jets.

Republic is the only airline in the U.S. to have made a CSeries order. In 2010, it placed a firm order for 40 CS300 planes and options for 40 more of the aircraft.

Bombardier spokeswoman Isabelle Gauthier said the Montreal-based manufacturer only just learned about the filing, but added that there is no immediate impact.

Industry observers have long questioned the viability of the order with Republic since it changed its business model. The planes were originally intended for former subsidiary Frontier Airlines. But that was sold in 2013, leaving the 120- to 160-seat planes too large for its remaining operations.

Earlier Thursday, Quebec’s transport minister said Ottawa and the province would control the CSeries program if the federal government joins it in contributing US$1 billion to the troubled jet program.

Quebec has secured a 49.5 per cent stake in the CSeries and two of five seats on a separate board after agreeing in October to the financial contribution. Bombardier would hold the three remaining seats and have the right to appoint a chairman, which it said would be former Quebec premier Daniel Johnson.

Ottawa would gain two additional seats on an expanded seven-member board if the federal government ponies up additional money, Jacques Daoust said in an interview with Radio-Canada.

“If we had a new player joining us, we could imagine having seven board seats,” Daoust said.

“The new partner and us would control the company. This is certainly a scenario that is being explored now, because we couldn’t imagine investing two-thirds of the funds and having a minority on the decision-making front.”

The federal government is evaluating the funding request.

The narrow-body CSeries planes, which are two years late and about US$5.4 billion over budget, are set to enter into service in the coming months.