The alliance between the two companies is natural as EVLO is already using Nuvation's battery management systems in its energy storage systems. 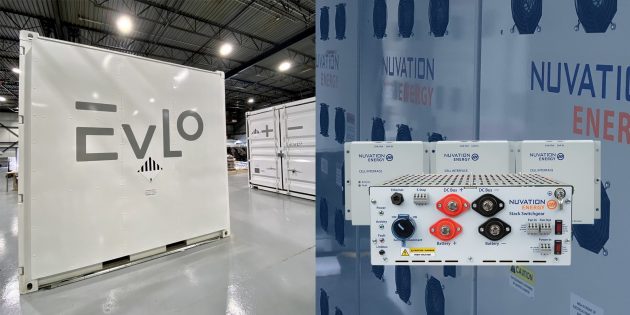 The alliance between the two companies is natural as EVLO is already using Nuvation’s battery management systems in its energy storage systems. Projects involved include the 9-MWh Tonnerre project in France, a 20-MWh project in Québec to support transmission line work, and the energy storage system in Lac-Mégantic’s microgrid project.

“We are happy to be strengthening our relationship with Nuvation Energy. They have solid experience in energy storage systems and this agreement will allow both companies to keep growing in today’s rapidly evolving energy storage market,” said Guillaume Hayet, EVLO’s President and CEO.

“Energy storage is experiencing very high growth. Nuvation is thrilled to be able to respond to strong customer demand for turnkey projects with reselling the safe and reliable LFP energy storage system from EVLO, built using Nuvation’s BMS. The EVLO 1000 showcases EVLO’s deep engineering expertise with superior thermal and chemical stability. Our teams have been working together for years, and with this reseller agreement, we are excited to further deepen our partnership with EVLO and Hydro-Quebec,” said Michael Worry, Nuvation Energy’s CEO and CTO.