As the Canadian International Auto Show gets underway in Toronto, AJAC has handed out its top accolade to the German automaker's new wagon 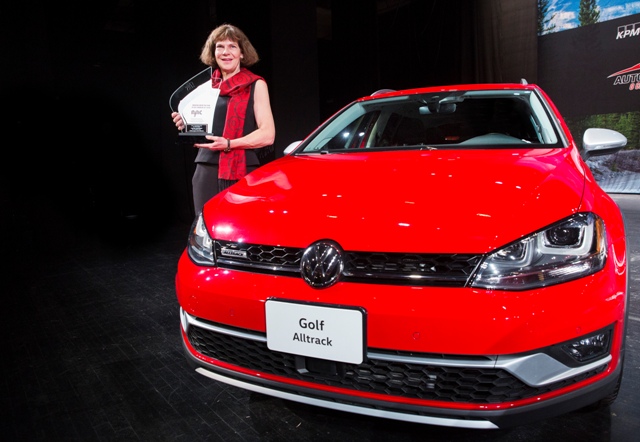 TORONTO—The 2017 Volkswagen Golf Alltrack is this year’s Canadian Car of the Year.

The Automobile Journalists Association of Canada (AJAC) handed out the award early Feb. 16 at the Metro Toronto Convention Centre in downtown Toronto to open the International Auto Show.

The VW edged out two other finalists, the BMW M2 and Hyundai Elantra, for the top accolade.

“It is such a great honour to have AJAC name the new Volkswagen Golf Alltrack as their car of the year,” Maria Stenström, Volkswagen Group Canada Inc.’s president and CEO, said. “By adding our 4MOTION all-wheel-drive to the Golf SportWagen, Canadians now have a fantasitic new alternative to choose from.”

The new all-wheel-drive wagon includes a 1.8-liter TSI engine rated at 170 horsepower and includes a number of autonomous driver-assist functions. In Canada it starts at $35,295.

Related: Automakers premiere range of vehicles at this year’s auto show—take a look at the biggest names, including Aston Martin’s new hypercarAJAC also announced the Subaru Forester as the winner of the 2017 Canadian Utility of the Year award Thursday, and unveiled the finalists for the Green Car of the Year award, which will be announced late next month.

The Chevrolet Malibu Hybrid, Kia Optima HEV and Toyota Prius are the three to make the final cut for the clean vehicle award.