The Canadian manufacturer delivered fewer business jets in 2017 than it has for over a decade. It's looking to the lavish Global 7000 to reignite sales 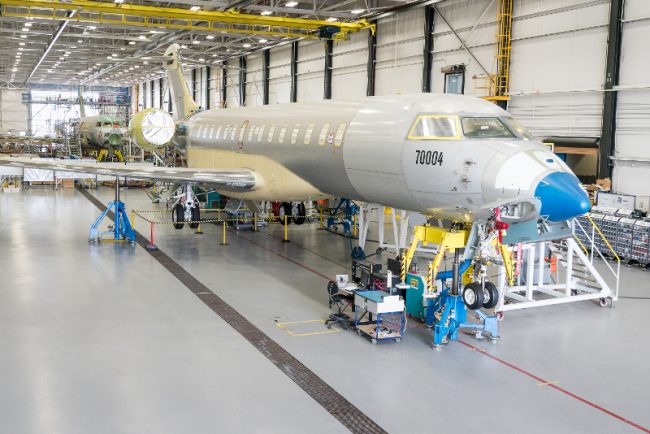 The company hopes the Toronto-based business aircraft program will put it back on top. PHOTO: Bombardier

MONTREAL—Bombardier Inc. expects to regain top spot among global business jet manufacturers in the coming years after delivering the fewest aircraft in more than a decade last year.

“With the Global 7000 we are going to regain the leadership position in the marketplace,” CEO Alain Bellemare said Feb. 21 at a Citi conference in Miami.

The Montreal-based company’s largest business jet is expected to be delivered later this year, contributing at full production US$3 billion to the US$10 billion in division revenues projected for 2020.

Bombardier sold 140 business jets worth US$5.2 billion at list prices last year, according to the General Aviation Manufacturers Association. Deliveries were the lowest since they shipped 130 in 2004.

That compared with Gulfstream Aerospace Corp., which shipped 120 planes valued at US$6.5 billion last year, similar to 2016.

Bombardier deliberately reduced its production rate in 2015 for business jets, causing the layoff of thousands of workers, as part of its turnaround plan that focused on improving margins.

“We wouldn’t have expected the down cycle to have lasted so long and everyone was anticipating some recovery at some point in time,” added chief financial officer John Di Bert.

He said the company “made the right call” by balancing supply with lower demand, something its competitors were slow to act upon.

Signs of life in the corporate jet market—including a lower number of used planes for sale and increased usage—portend to better results to come, Di Bert said.

“The second half of 2017 people started to get more confident but before that not so much so.”

Di Bert said the company is being realistic about the recovery, but 2018 could be an important year and higher than projected sales are possible for 2020.

“We’re going to watch this and going to favour getting strength back before we kind of think about big rate adjustments.”

Asked about the future of Learjet, Bellemare said the small business jets aren’t “material” to its operations but he didn’t indicate any interest to sell the unit.

“The customers didn’t move away, they were just more prudent,” he said.

“They wanted to know what the outcome would be but the momentum is good, the market is solid and we’re seeing it from the multiple discussions that we have with customers everywhere around the world.”