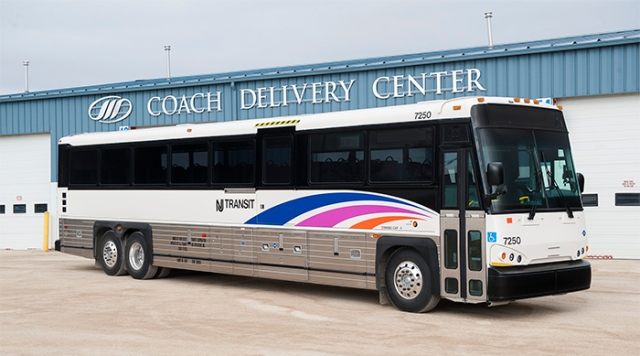 New Flyer hopes to work out a solution to the funding shortfall during its scheduled three-week summer shutdown. PHOTO: MCI

WINNIPEG—Bus maker Motor Coach Industries (MCI) is preparing to halt production on an order for more than 100 commuter buses as New Jersey addresses a funding shortfall that has emptied the state’s Transportation Trust Fund Account.

The subsidiary of Winnipeg-based New Flyer Industries Inc. won a contract to deliver as many as 1,219 buses to New Jersey Transit last November and has been working to fill an initial firm order for 184 of the coaches since May.

Now however, the company has announced it has received a notice from the transit provider calling for “an immediate and orderly shutdown of all ongoing work” as a result of state funding problems. New Flyer said it has been advised the replenishment of the Transportation Trust Fund Account—which oversees transit funding for New Jersey—has been delayed. The company’s president and CEO, Paul Soubry, said it is working diligently with the state to “understand the impact of this funding disruption.”

As of July 11 the manufacturer has delivered five finished buses and has 76 others at various stages of completion.

“MCI will shortly commence its annual three week summer shutdown and we will synchronize an orderly shutdown of NJT production to coincide with it and we hope this will provide sufficient time for the funding situation to be resolved,” Soubry said.

Under the agreement, New Flyer expected to deliver 142 of the buses this year. It said the 61 buses it has yet to begin production on represent just under two per cent of the company’s overall manufacturing schedule for the year.

The company said it cannot predict whether or not the disruption will force it to adjust its annual production guidance.