The North American appetite for small SUVs seems insatiable as Honda throws back curtain on new version of current sales king, the CR-V 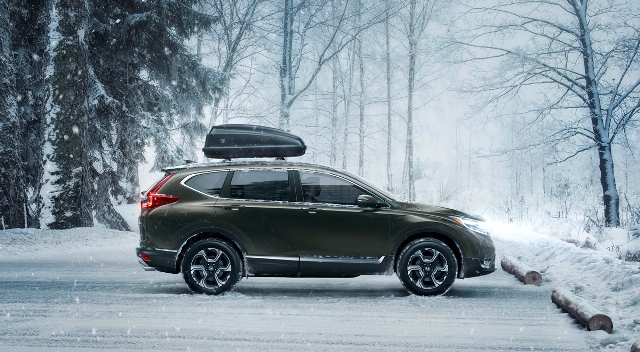 The 2017 CR-V has a wider-looking exterior with a rounded body as well as a number of interior changes. PHOTO: Honda

DETROIT—America’s new family car is getting a major face-lift.

It’s not the Toyota Camry or some other midsize car. It’s the Honda CR-V, a compact SUV that for the past three months has been the top-selling vehicle in America excluding pickup trucks.

The new Honda, unveiled Oct. 13, is scheduled to hit showrooms this winter. The timing is perfect, as consumers in the U.S. and worldwide show a preference for smaller SUVs that are almost as fuel-efficient as cars yet have more room to haul cargo and people. The compact SUV passed the midsize car last year to become the top-selling segment of the U.S. market, and it’s showing no sign of turning back.

The new CR-V, based on the underpinnings of Honda’s popular Civic small car, gets a wider-looking exterior with a rounded body. The interior gets a soft dashboard and restyled, stitched seats. It comes with Apple CarPlay and Android Auto compatibility. By customer demand, Honda has gone back to having a real volume control knob for the entertainment system.

More Honda news: Civic Hatchback returning to North American market this fall after 10-year absenceThe SUV is bigger from wheel to wheel, providing two more inches of legroom in the rear seat. Cargo space with the seats folded down is almost 10 inches longer than the old model, the company said.
Advertisement

The new CR-V comes with a 2.4-litre, 184-horsepower four-cylinder engine from the previous model. On upper trim levels, there’s a 190-horsepower, 1.5-litre turbocharged four-cylinder from the new Civic. Both have a continuously variable automatic transmission.

Gas mileage hasn’t been determined but Honda says the turbo will be better than the current model and best in the market segment. The current two-wheel-drive model gets an estimated 32 mpg on the highway. The price wasn’t announced.

The CR-V has defied the auto industry axiom that old products don’t sell as well as new ones. The SUV was last revamped in 2012, yet it has remained the top seller in its segment. Since July, the only vehicles in the U.S. to outsell the CR-V have been full-size pickup trucks offered by the Detroit Three. The CR-V has outsold the perennial top-selling car in the U.S., the midsize Camry, all summer.

Michelle Krebs, senior analyst for Autotrader, says it won’t be long until a compact SUV permanently unseats the Camry as the top-selling car-based vehicle. The winner, though, may end up being the Toyota RAV4 small SUV, because Toyota is more willing than Honda to offer discounts and sell to rental car companies to boost sales, Krebs said.

Compact SUVs accounted for only 7.2 per cent of the U.S. market just a decade ago, but that has more than doubled to 16.5 per cent so far this year, Edmunds.com says. Compact SUV sales are up 4 per cent through September, while overall U.S. auto sales are up only 0.5 per cent.

Krebs sees the compact SUV segment becoming increasingly competitive when the new CR-V arrives. General Motors is rolling out a new Chevrolet Equinox early next year, and both will go up against relatively new versions of the RAV4 and the Nissan Rogue. Other automakers will freshen their entries. It’s all good for consumers.

“We think there will be more aggressive marketing, maybe more incentives in that segment,” she said.