NDP has more leverage with Libs because the Bloc not a national party: Singh 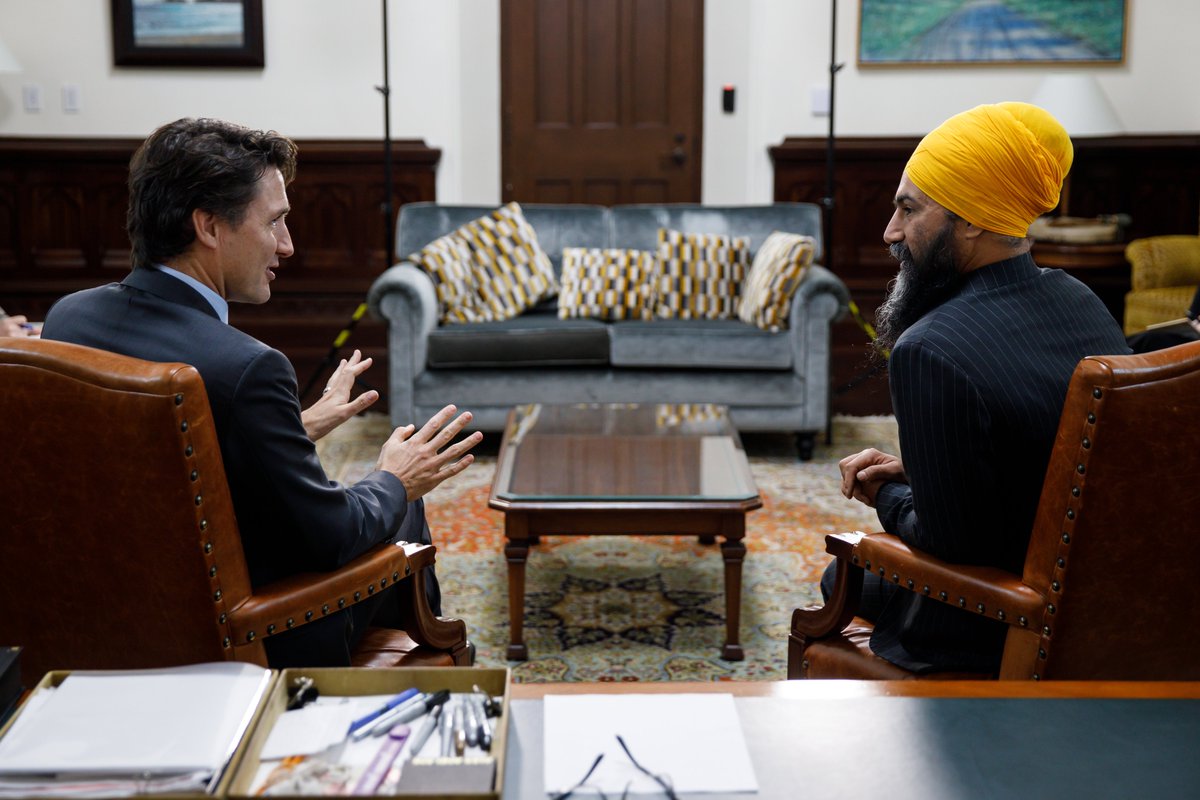 Singh and Trudeau share common ground on some issues, but stark differences need to be addressed if they are going to work together. PHOTO: Justin Trudeau/Twitter

OTTAWA—NDP Leader Jagmeet Singh says he believes Prime Minister Justin Trudeau’s only options to pass legislation in a minority Parliament are to work with his New Democrats or the Conservatives, dismissing the idea the Liberals could work with the Bloc Quebecois because the Bloc isn’t concerned with national interests.

Singh met Trudeau in Ottawa Thursday to try to leverage his party’s position in a minority government.

The Liberal leader is meeting opposition leaders one by one to assess what he’ll have to do to gain and maintain the confidence of the House of Commons. It appears part of Singh’s strategy is to suggest the votes of Bloc Quebecois MPs aren’t enough, even though they and the Liberals together hold more than half the seats in the Commons. The Bloc has more MPs than the NDP does.

Speaking to reporters following the meeting, the New Democratic leader said he believes his party is in a good position to get Liberal buy-in for NDP priorities in part because of the two parties’ shared progressive perspective on many key issues.

But he also suggested Trudeau does not have many other options.

“If they want to pass something national that really benefits all Canadians, they’ve got really two options for a national party. They can choose to work with the Conservatives or they can work with us,” he said.

When asked why he doesn’t believe Trudeau could seek support from the Bloc Quebecois, Singh said he believes that is simply not an option for the Liberals, because the Bloc is not a national party.

“Mr. (Yves-Francois) Blanchet has made it really clear that he’s not interested in working on national programs that benefit all Canadians. That’s not his goal, that’s not his party’s goal, and frankly that’s not his job. He was elected in Quebec, for Quebecers, and that’s fine,” Singh said.

During their meeting, Singh said, he listed the top three priorities he hopes will make it into the throne speech laying out the Liberals’ governing plan in December, the primary one being the immediate creation of a universal, single-payer pharmacare program. Singh also pressed Trudeau to drop the government’s legal challenge of a recent Canadian Human Rights Tribunal ruling that ordered Ottawa to pay $40,000 each in compensation to Indigenous children who were wrongly placed in foster care after 2007, as well as to their parents or grandparents.

Singh said Trudeau didn’t commit to anything, but also didn’t close the door to the idea of dropping the appeal.

He mentioned dental care, affordability and housing as other topics the two discussed. In addition, he said Trudeau acknowledged that Singh would continue to oppose the Trans Mountain pipeline project, but the NDP leader would not say whether Liberal backing for the Alberta-B.C. pipeline could lead him to vote against the Liberals in a confidence vote.

Singh also left a letter with Trudeau saying he believes the election result shows many Canadians feel ignored by the federal government.

The letter details additional issues that Singh sees as NDP priorities for the upcoming term, including: support for energy-efficiency retrofits for buildings and made-in-Canada electric transit; expanded access to employment insurance and training for workers; relief for student debt and a regulatory cap on cellphone and internet bills.

The letter also says New Democrats will continue to call for electoral reform.

“If you had fulfilled your commitment to modernizing Canada’s electoral system after 2015, we would not be faced with the current situation where hundreds of thousands of Canadian voters in some regions like the Prairies and Quebec are not represented at all,” Singh wrote.

During a photo-op before their official meeting, the two leaders shared a warm handshake and appeared friendly and at ease with one another.

Trudeau said it was a pleasure to welcome the NDP leader to his office, adding that it would offer “an opportunity to talk about the many things we have in common in our perspectives.”

“Canadians expect us, as always in the House, to work together to serve them according to their priorities and desires and that’s really something we’re very much focused on, working with all parties in the house,” Trudeau said.

Singh has said he’s not issuing ultimatums, but his party would be willing to vote against the throne speech if it doesn’t acknowledge the NDP’s requests somehow.

He reiterated those sentiments following the meeting.

“I have no interest in blindly working with the Liberals (but) if they want to deliver on the real things that help Canadians out, absolutely we’re going to work together,” Singh said.

“I want to be constructive, but by no means does that mean I’m beholden in any way to working with the Liberals. I have a job, which is to fight for Canadians, and that means fighting for better health care, fighting for better housing, fighting for Indigenous communities. I’m going to do that and I’m not worried about having to do something because of any political exigency, I want to do this because it matters to people and I’m ready to do that.”