The two leaders spoke over the phone May 14 and discussed the potential for wrapping up a deal. But such an initiative ignores the reality that substantive issues still need to be sorted out 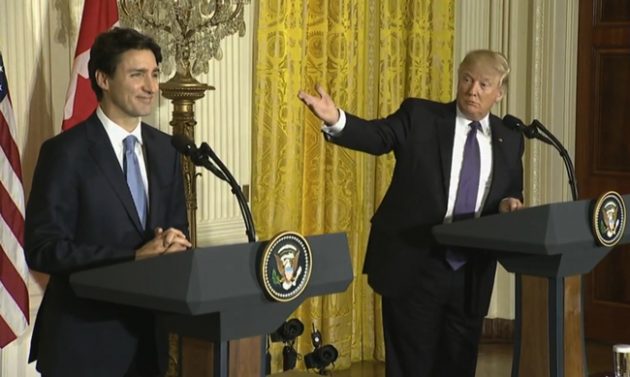 In a release May 14, Trudeau’s office said he and U.S. President Trump talked about “bringing the negotiations to a prompt conclusion.”

WASHINGTON—President Donald Trump and Prime Minister Justin Trudeau discussed the possibility Monday of immediately wrapping up a NAFTA deal despite signs of skepticism about whether that goal is feasible.

U.S. officials are sounding less than bullish about the prospects of a NAFTA deal by week’s end, which is considered the unofficial deadline for finalizing an agreement this year.

That’s because some view the de facto deadline as Thursday, high-level negotiators don’t even have a meeting time set yet for this week and one leading U.S. politician says none of the hot-button issues have been resolved.

The countries have been meeting frequently in an effort to get an agreement before national elections in Mexico and the U.S. delay the process until 2019.

The national leaders spoke by phone about getting a quick agreement. In a release Monday, Trudeau’s office said they talked about “bringing the negotiations to a prompt conclusion,” and the White House issued a statement saying, “President Trump underscored the importance of quickly concluding an agreement.”

Yet in an appearance at the National Press Club in Washington on Monday, Trump’s own commerce secretary responded in the negative when asked whether any major issues had been resolved lately.

“I don’t believe that any of the big hot topics (were),” Wilbur Ross said.

“The rules of origin, the (five-year) sunset provision, the dispute resolution provision, labour—big topics like that—are still a work in progress. Those are very complex issues—particularly rules of origin. So it eventually will come down to every comma, every semi-colon.”

There are several signs of a disconnect between the ambitions of those who want significant changes in the agreement and the vanishingly small window of time left to reach an agreement in the short term.

Take pharmaceuticals as one example. Last week, the U.S. signalled its desire to use trade deals to change the way drug prices are set abroad, in an effort to have other countries shoulder more of the costs of pharma research.

The U.S. has specifically complained about Canadian pricing policies.

Such a negotiation would surely be controversial, yet one person familiar with the talks said it has not substantially arisen, as autos remain the focus of the negotiation.

Dairy is another example.

It’s yet another politically sensitive issue that matters not only to Canadians, but also to major American politicians. Congressional leader Paul Ryan, who is from the dairy-producing state of Wisconsin, described it as another major unaddressed issue.

Ryan has dropped subtle hints of his own doubts about an immediate deal.

In a speech last week, the House speaker noted that he helped write the rules of the so-called fast-track legislation for passing a trade deal through the U.S. Congress.

He estimated that lawmakers would have to see the paper text of an agreement by this Thursday to meet all the procedural deadlines for a vote in 2018.

Ryan then stared at his watch, noted the date, and drew laughs from the audience.

“I’ll let you … draw the conclusion,” Ryan said. “There are a handful of unresolved issues. I’m just not,” he said, before cutting himself off, saying he didn’t want to make news.

In a meeting last week with Foreign Affairs Minister Chrystia Freeland, Ryan described the deadlines embedded in the legislation he helped create.

In his speech Monday, the commerce secretary alluded to the fact Freeland met with lawmakers when she was in Washington last week, something officials from Canada and other countries do regularly.

Ross noted that other countries try working around U.S. negotiators, and deal directly with legislators.

“The Canadian lead negotiator was here in the States. She spent two-and-a-half hours in negotiations with us, and about 40 hours lobbying Capitol Hill,” Ross said.

“That’s not an unusual ratio for foreign countries. They try to get around us through the political process.”

Ross’s math was a little off. While it’s true Freeland did meet with lawmakers, she spent several hours on Capitol Hill, far fewer than the number of Ross suggested.

Another ongoing element of uncertainty involves steel and aluminum tariffs.

The tariffs are scheduled to hit Canada and Mexico on June 1, depending on the NAFTA outcome. Ross wouldn’t say what would happen, when asked about the tariffs: “You’ll be the first to know on June 1… Or maybe a little before.”