"The city wants to put their trucks here," says blacksmith Mathieu Collette, who says Montreal is using a lease dispute to evict him from the historic building overlooking the Bonaventure Expressway 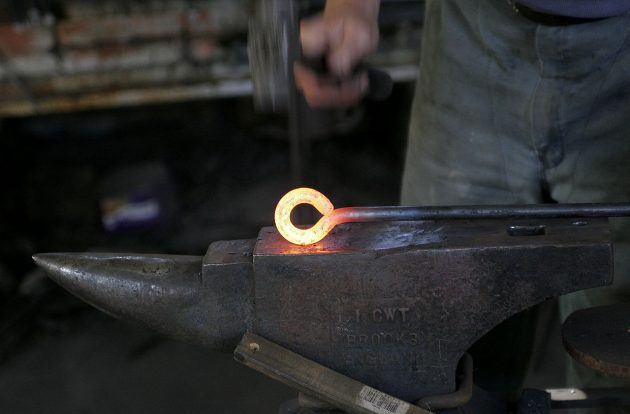 Mathieu Collette, wearing black overalls and with his dark hair in a ponytail, strikes a red-hot chunk of iron resting on a 230-year-old anvil from France.

“No one in Canada is doing what we’re doing here,” he says as a bead of sweat drips down his forehead. “We are even unique in North America.”

While blacksmithing classes exist in certain parts of the country, Collette says his non-profit Les Forges de Montreal (The Forges of Montreal) and the building out of which it operates is the only place in North America dedicated to teaching the ancient techniques of forging metal.

He and his colleagues offer apprenticeships to anyone interested in keeping the trade alive.

Since 2000, Collette and several other blacksmiths have shared the workspace but they say the city is trying to kick them out due to a lease dispute.

“The city wants to put their trucks here,” Collette says in front of a window overlooking the Bonaventure Expressway, which is just a few metres away.

He could pick up and move but Collette says the location of his metal workshop is as important as the methods he teaches young people.

Behind the stone structure is the Lachine Canal, which used to be lined with factories that processed wood, steel, leather and other products crucial to the building of Canada.

Next door is one of the city’s imposing grain silos, home to the company that owns Five Roses flour as well as the flashing, red neon sign of the same name that has become an iconic landmark in the Montreal skyline.

The symbolism of a blacksmith workshop surrounded by factories, train tracks and other symbols of the Industrial Revolution—which made the ancient techniques being taught inside redundant—is not lost on Collette.

“Our old techniques are alive and well in the middle (of the symbols) of Canada’s industrial revolution,” he said.

The federal government owns the land on which the building sits and Collette says he wants to talk to Ottawa about expanding as well as creating a museum and outdoor recreation area to showcase Canada’s industrial past, including blacksmithing.

“It’s totally unique here,” he said. “Just in back of us is the entrance of the canal that made Canada. The mills, the train, the Victoria Bridge in back of us. No one knows anything about this. We want to make a museum that explains all that.”

But Collette and his partners first need to settle their conflict with the city, which owns the building.

Collette says he had a deal with the last administration to put off expensive renovations.

The city contends the agreement was never formally approved and that the group is violating the lease by not proceeding with the renovations.

City spokeswoman Anik de Repentigny said via email the Montreal forges group is in default regarding its contractual obligations and that “the file is following its course. We have no further comment.”

Collette says he hopes Montrealers and the mayor will recognize that his group is preserving part of the city’s cultural heritage.

“We are a team of passionate people who love to share the old techniques of blacksmithing with the public,” he said. “Before, people were proud to make things that would last forever. And that’s why the old techniques are better than the new ones.”