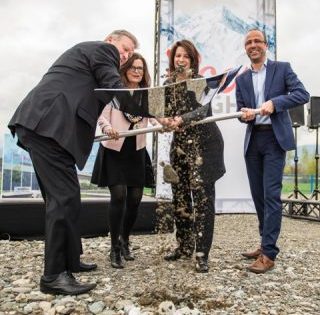 Top company brass and local government leaders put shovels to the ground at the Chilliwack, B.C. site April 25, officially marking the start of construction on the $200 million manufacturing plant.

Located about 100 kilometres east of Vancouver, the new facility will make a number of the Canadian-U.S. beer maker’s famous brews, as well as cider and other specialty products.

“With Molson’s 230 year brewing legacy along the shores of the St. Lawrence River in Montreal, and Coors brewing for 144 years at the foot of the Rocky Mountains in Colorado, it’s fitting for Molson Coors to break ground on a new brewery at the foot of the Cascade Mountains in the Fraser Valley,” the company’s president and CEO, Frederic Landtmeters, said in a statement.

The Chilliwack site will replace the company’s 55-year-old downtown Vancouver plant, where Molson began winding down operations in 2015.

Construction is expected to occupy about 1,000 workers at peak and Molson says the site will employ about 100 once it begins producing beer.

The company plans to begin brewing operations in early 2019.