The new facility will replace the brewer's 231-year-old plant on the St. Lawrence River in central Montreal 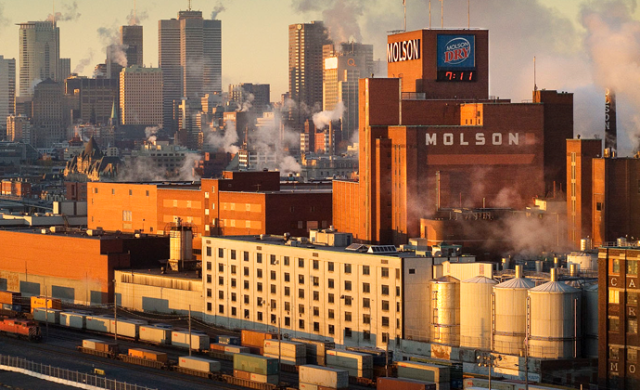 The company has elected to build a new plant as opposed to modernizing its 231-year-old plant in Montreal. PHOTO: Molson Coors

MONTREAL—A tract of waterfront land at the edge of Old Montreal will undergo a transformation after Molson Coors announced plans to spend up to $500 million to build a new brewery in the city instead of modernizing its current brewery, North America’s oldest.

The company’s decision, which follows a two-year study, was announced to employees July 5.

Molson Coors Canada CEO Fred Landtmeters said the brewer is exploring options to ensure Molson’s heritage is commemorated at its original location, which opened in 1786.

“The Montreal brewery is an emblem and this historic site will be an invaluable legacy for the city,” Landtmeters said in a statement.

The brewer has said it plans to maintain a microbrewery and store at the 231-year-old site near Old Montreal along the St. Lawrence River, with the rest being sold for redevelopment under the auspices of the city.

The location of the new operation hasn’t yet been determined, but it is expected to remain in the Greater Montreal area. The next step will be to develop a business plan for the construction of a new Quebec brewery in about five years, Molson Coors said.

Montreal Mayor Denis Coderre said Molson’s decision to revitalize the historic area fits with other redevelopments such as the nearby Radio-Canada headquarters and foot of the Jacques Cartier Bridge, along with western sections of the old city.

“I think we are in the process of developing something extraordinary for the next 10 to 15 years that will have an impact,” he said.

Company spokesman Francois Lefebvre said it’s too soon to know if any of the 1,000 employees who work at the brewery and a nearby distribution centre will lose their jobs. The new location will include production and distribution at the same site, he added.

Local union president Eric Picotte of the Teamsters welcomed the decision to maintain a long-term brewing presence in Montreal.

But he said the company hasn’t confirmed the new plant’s production strategy, including the amount of beer it will make. Molson Coors said it will continue to produce beer in bottles and cans at the site, but Picotte said a further shift to cans would require fewer employees.

“There are no guarantees,” Picotte said. “That’s what worries us.”

Over the last six years, Molson Coors has shifted more production to cans, which has resulted in the loss of more than 100 employees, he added.

Molson Coors sold its operations in Vancouver last year. The company will continue to produce beer at that site for up to five years while it builds a new facility in Chilliwack, B.C.

He expects major property development firms could be interested because waterfront properties don’t become available often, adding that the oldest parts of the brewery that grace the city skyline will likely be preserved but larger warehouse and production areas will probably be demolished.

“I think you’ll see the most distinctive pieces of the site that you’d recognize on a postcard are going to stay in place and around that there’s going to be much more significant denser development happening.”