Modi clamps down on Kashmir, and India loves him for it

India's unapologetic Hindu nationalist prime minister has been met with roaring approval for his totalitarian crackdown on Muslim Kashmir. But critics believe the moves were about deflecting attention from India's stumbling economy 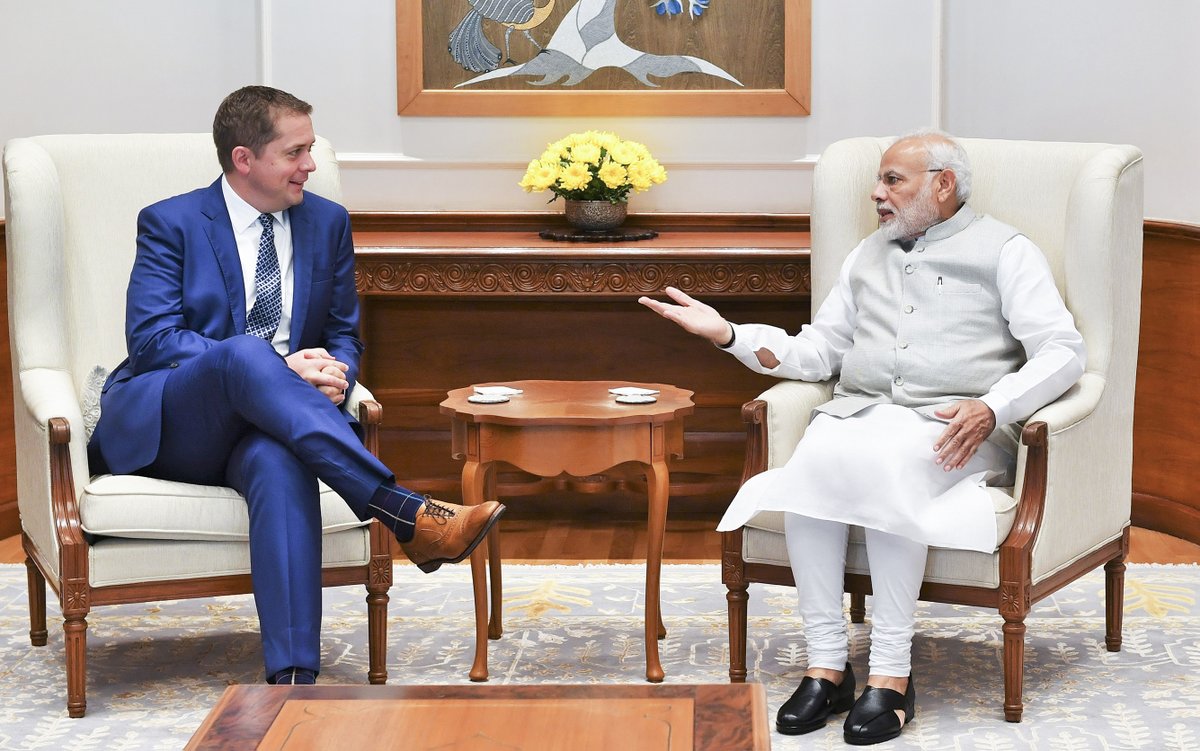 The prime minister of the world’s largest democracy had clamped down on Kashmir to near-totalitarian levels. And Narendra Modi’s country reacted with roaring approval: As he had Kashmir stripped of statehood and its special constitutional status, even some of his political opponents were calling out support.

Modi, a Hindu nationalist by the time he was 10 years old, had upended life in India’s only Muslim-majority state, flexing those nationalist muscles for his millions of followers.

They loved him for it.

“All of Kashmir is ours!” a jubilant middle-aged demonstrator, draped in the saffron-colored scarf of a Hindu, shouted during a New Delhi street celebration just before Parliament voted to end Kashmir’s decades of semi-autonomy.

“Modi has fulfilled another promise,” said a more quiet-spoken supporter, Sushanto Sen, a retired senior manager with an aerospace and defence company, who lives in the crowded north Indian city of Lucknow. “Kashmir is part of India, and whatever rules apply to us should apply to others too.”

To his critics, Modi is an authoritarian manipulator who wants to turn India into an avowedly Hindu nation. But to his supporters, Modi is an incorruptible ascetic unafraid to tell the truth—a man who understands what it means to be poor but, like so many of his supporters, wants India to be treated with respect by the rest of the world.

Indian prime ministers have long been expected to be unapproachable and intellectual. They were people like Indira Gandhi, scion of India’s most powerful family, and Manmohan Singh, with his expressionless face, blue turban and Ph.D. in economics.

Not Modi, who has carefully crafted a different public image. Even as he avoids unscripted moments—he rarely talks to reporters, and most of his appearances are in TV speeches or political rallies—he is still seen by many as an Indian everyman.

Modi is the proud son of a tea-stall owner who became a canny politician and skilled orator and who now, Putin-like, does adventure TV shows like “Man vs. Wild.” (Unlike Putin, though, Modi keeps his shirt on).

He doesn’t lack for confidence.

“I have never experienced fear or nervousness,” he told the show’s host, the British ex-special forces soldier Bear Grylls, with whom he hiked through an Indian tiger reserve carrying a spear fashioned from a knife and a branch, TV cameras in tow. “I am unable to explain to people what nervousness is.”

Born in 1950 to a poor family in a small town in the western state of Gujarat, Modi proudly talks of his humble beginnings, growing up without running water or electric lights.

He has been separated from his wife, to whom he was engaged as a child in an arranged marriage, for decades. He has no children. Unlike most Indian politicians, he has no circle of relatives hovering around him in search of powerful contacts or lucrative government contracts. He has his party, the Bharatiya Janata Party, or BJP, and the cause of Hindu nationalism. That is all.

That focus has created an immensely powerful political machine, one that has hobbled the long-dominant Congress party and made Modi, by far, the most powerful politician in India for a generation.

Modi, who first became prime minister in 2014, has reinforced his power with nearly every election since then.

In national voting earlier this year, the BJP took 303 of the 542 seats in the lower house of Parliament. The Congress party, dominated by the Gandhi family since even before independence from Britain in 1947, won just 52. Amit Shah, Modi’s top aide and home minister, told reporters that the BJP had set up more than a million small organizing offices across the country ahead of the elections—five times as many as in 2014.

For the Congress party, the defeat was crushing. It forced Indira Gandhi’s grandson Rahul to quit as party president.

These days, Modi is seen around the world as a pivotal Asian leader. He’s known for welcoming foreign heads of state with bear hugs. He has addressed a joint session of the U.S. Congress. He clearly enjoys seeing himself as the embodiment of an increasingly muscular India.

But just a little over a decade ago he was denied a U.S. visa because of suspicions that he had quietly supported the bloody 2002 anti-Muslim riots that shook Gujarat, the state which he long ran as chief minister.

While government investigators eventually ruled there was no evidence to charge him, the shadow of the riots refuses to go away, particularly among India’s English-speaking elite, who have long viewed him with deep suspicion.

But he quickly turned that shadow against his critics—and the riots into a punchline.

After a top Congress leader called him a “maut ka saudagar”—a merchant of death—Modi began using the line himself.

“Do I look like a merchant of death?” he would ask in speeches, enjoying the thunder of crowds shouting back “No!”

Modi has also faced fierce criticism in recent years. It came amid growing attacks by Hindu mobs against Muslims and Dalits, the low-caste people once known as Untouchables, saying they had killed cows, which devout Hindus see as sacred. Some of these self-styled “gau rakshaks”—cow protectors—have ties to the BJP or other Hindu nationalist groups.

Most often, Modi meets the attacks with silence.

Modi first made a name for himself as a roving organizer for the Rashtriya Swayamsevak Sangh, or RSS, a Hindu nationalist group with millions of followers that eventually gave rise to the BJP.

Many of his early beliefs were shaped in the RSS, with its heavy emphasis on paramilitary drills, Hindu prayers and personal sacrifice. The current head of the RSS, Mohan Bhagwat, turned heads last year when he said Muslims were welcome in India, but also insisted that everyone living in India was a Hindu.

Today, Modi’s Hinduism often goes unspoken but is regularly on display. While things like yoga and vegetarianism have little religious connotation in the West, their Hindu connections are clear to Indian voters—especially when practiced by a politician. So when Modi sits in the lotus position in front of TV crews on International Yoga Day, or talks about the benefits of vegetarianism, or names a state water program after the Hindu concept of divine energy, all of India understands the message: Finally, a leader who is openly and proudly Hindu.

One of Modi’s brothers said that his fascination with power reaches back to his childhood, when he first began attending meetings at the local RSS unit, or shakha.

“He liked their discipline and the line of authority,” Somabhai Modi told Nilanjan Mukhopadhyay, author of a Modi biography. “He was always greatly impressed by the fact that only one person gave all the orders in the shakha and everyone followed the command.”

It’s a lesson Modi learned well, cementing his authority at the top of the party since becoming prime minister and sidelining potential rivals.

Shah, his closest aide, is widely seen as the architect of the government’s Hindu agenda. Both men have long argued for the revocation of special status for Kashmir, a mountainous Muslim state of pine forests, clear streams and highly fertile lowland soil.

Its tortured modern history reaches back to partition in 1947, when British India was divided into largely Hindu India and overwhelmingly Muslim Pakistan. In the wake of the India-Pakistan war that followed partition, when Pakistan seized control of part of Kashmir, the Indian constitution was amended to give special rights to the state, including its own constitution, limited decision-making powers and laws forbidding non-Kashmiris from settling there.

The state, divided between India and Pakistan but claimed by both, has been wracked by cycles of separatist violence and brutal crackdowns since the late 1980s, when New Delhi rigged local elections and Pakistani weapons and militants began filtering across the border. Some 70,000 people have been killed in the violence.

Over the decades, most special rights had been whittled away. But they remained symbolically powerful across Indian-controlled Kashmir, where most people want independence from India or a merger with Pakistan. The restrictions on the sale of land to non-Kashmiris were particularly important, seen as a way to keep outsiders from swamping the state and changing its nature.

While Kashmir has long seen itself as a suffering stepchild of India, forced to endure the presence of hundreds of thousands of Indian soldiers, many Indians—and especially the BJP—saw the region as the ungrateful recipient of those legal protections.

But why bother to take away protections that, for the most part, now mean little? Enter Modi, who said he wanted to bring Kashmir more fully into India, ending the insurgency and jump-starting development.

“A new age has begun,” he said in a nationally televised speech last week, saying the old system had created “secessionism, terrorism, nepotism and widespread corruption.”

To some Modi critics, the timing of the Kashmir decision was about deflecting attention from India’s stumbling economy, with its record unemployment and falling foreign investment. But it could also simply be about power.

“The basic thing is that he wants to convey the message that he is tightening the screws on Kashmir,” said Mukhopadhyay, the Modi biographer. “Modi’s policy has not been aimed at the development of Kashmir but at securing the vote of his core constituency.”

The tightened screws remain. More than a week after the clampdown began, the region’s main city, Srinagar, is a maze of roadblocks and razor wire. Most communications are still shut off. Sporadic protests have flared.

“I think this place is going to erupt,” said Shah Faesal, a young Kashmiri politician. “It’s a volcano in the making.”

Hours after speaking to The Associated Press, Press Trust of India reported that Faesal had been detained by security forces.

—Tim Sullivan has written about India for nearly two decades.