Quebec-based fabricator relies on technology and a culture of lean

What motivates a manufacturer to invest in new equipment and additional hires? For Metal Bernard, a Quebec-based fabricator, it was in part the promise of a burgeoning mining sector that spurred the purchase of new equipment and an expansion in 2012. 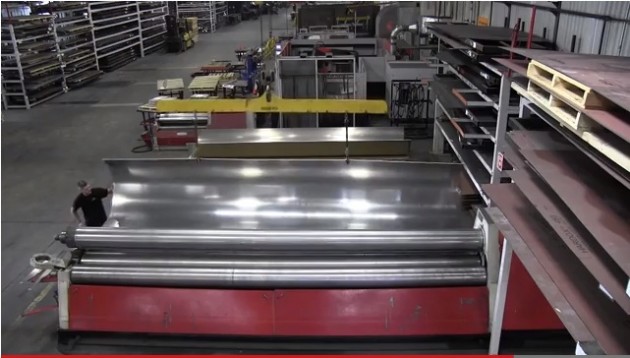 Metal Bernard’s recent investment included a DAVI MCB 6041 plate roller, with a capacity of up to 20 feet. Its digital controller allows the fabricator to roll thick or thin sheets of various shapes— impossible to achieve with conventional machines, according to the company. Photos courtesy of: Metal Bernard.

“We believed that having equipment that was different from other companies would give us an edge,” says Louis Veilleux, CEO. “We were expecting mining to really grow but it didn’t.”

Metal Bernard wouldn’t be the first manufacturer facing that situation—looking for new orders and growth to justify an equipment upgrade. “As entrepreneurs we sometimes take risks, which we did. It didn’t go as expected but we said ‘we’ve got this equipment and now we have to bring customers in’.”

With the mining sector heading into a down cycle, Metal Bernard actively pursued other industries, especially transportation and construction. “Many were companies in industries that had never been customers of ours but because of the equipment, they came to us,” he adds.

The company, which has been in business for 31 years, has worked on a wide range of significant projects, providing components for original equipment manufacturers in transportation, mining and industrial manufacturing. It’s also contributed to state-of-the-art auditoriums, high-end swimming pools, a waste processing facility in Edmonton; and provided parts and inputs for the Bombardier C-Series and trains. Its components are now installed in far-flung markets such as China. 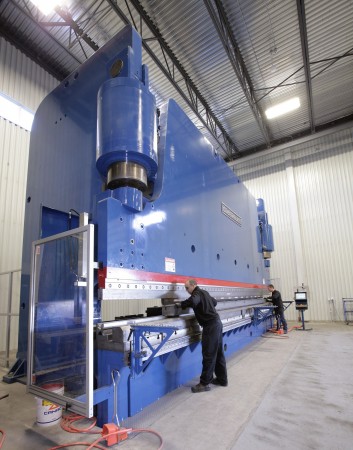 Metal Bernard is seeing strong growth and hired 40 people over the past several months, bringing its workforce at the facility to more than 140 people, Veilleux says. He and the team see continued investment in the shop floor—now at 67,000 square feet—as one of the keys to competitive edge.

“We bought a new fiber laser and another press brake and more technology,” he says, adding Metal Bernard has doubled its office space and has purchased an additional piece of land for future expansion.

With the increasing pace of orders—and variety of parts and components worked on—Metal Bernard is now aiming for consistent quality and processes from start to finish.

“It’s very important to filter what’s going into the shop and make sure the information on the work they have is accurate. If they have a drawing on the shop floor, this drawing has been checked. If they have data on their computer, this data has been checked. We’re trying really hard to have pristine, high quality documentation and data going into the shop. The right information, the right equipment with the right people gives us results.”

Help in that regard will come from investment in a new ERP (Enterprise Resource Planning) system. Metal Bernard is currently in the process of installing the new ERP, intended to replace an older system the company has outgrown.

The shop also thrives on lean manufacturing principles, based on the Toyota Production System. Lean production—along with the additional equipment and team members—has allowed Metal Bernard to keep pace with increasing orders.

“With lean, we shortened the distance between raw material and equipment, and we put everything in work cells,” he says. “We tried to keep it within a 100 feet. It’s way more efficient because everything is at a human scale. We have tables with wheels so you can pull your job from the laser to the bending or welding or shipping.”

As unemployment is very low in the area, Metal Bernard works hard to attract new immigrants who can share their talent and work skills with the team.

“Having all this equipment and spending all that money is one thing but we need people to make it happen. We’re really keen on people in our companies. A key factor for success is people first.”

With more technology purchases in the works, Metal Bernard is keen to attract new business. Part of that effort involves convincing large manufacturers to outsource fabrication to job shops such as Metal Bernard. All too often, Veilleux sees these companies try to do it all.

“We see a lot of idling equipment in some customers’ [facilities] that fabricate a lot of their parts by themselves. We job shops specialize in parts and at some points we’re running three shifts here. We do believe a job shop like ours plays a very important part in the overall economy.”