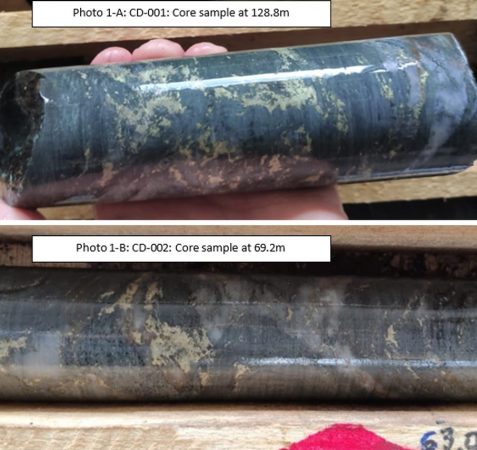 LONDON — Meridian Mining UK S announced that the drill and surface geophysical programs have advanced at its Cabaçal copper-gold project in Mato Grosso, Brazil with the completion of the first two diamond holes of the approximate seventy drill hole program Figure 1. The first diamond drill hole (“DDH”) CD-001 targeting the Southern Copper Zone (“SCZ”) has been concluded to a depth of 189.55m by Rig One. Rig Two concluded CD-002 as an initial test the Easter Copper Zone (“ECZ”) and was completed to a depth of 95.2m. Assays from the first two holes are pending. The surface electromagnetic (“EM”) program is completed and has defined the Cabaçal mine sequence’s response that extends past the historic mine limits. The Company has also signed a technical exchange agreement with the Universidade Federal de Mato Grosso (“UFMT”) accessing its historical core collection from Cabaçal.

CD-001 was collared above the SCZ and projecting ~ 80m south of the limit of historical workings based on digitized records of historical selective room and pillar mine development. The hole was drilled from the historical drill pad of JUSPD 596, which intersected 15m @ 5.20% Cu, 2.66g/t Au, 9.54 g/t Ag. CD-001 was drilled HQ through the saprolite and upper bedrock and reduced to NQ. The hole intersected the “CTB” mine sequence unit – a foliated meta-volcaniclastic horizon, with disseminated sulphides and local stringer mineralisation, from 50m downhole, and continued to the acid volcanic footwall (“TAC”) from 151.6m. As standard practice CD-001 is now being surveyed to check the down hole trajectory.

CD-002 was collared above the ECZ, ~ 50m west of an exploratory branch of the historical mine workings, into an area where this sequence becomes more copper dominant. Part of the mine stratigraphy here projects below a sub-horizontal gabbroic sill that blocks all surface expression or soil anomaly of the Eastern Copper Zone. The hole was drilled from the historic pad of JUSDP 228, which intersected 23.03m @ 0.95% Cu, 0.3g/t Au, 7g/t Ag, including 3.18, @ 4.45% Cu, 1.36g/t Au, 39.06g/t Ag. Adjacent holes in historical cross sections show the projection of stringer sulphide zones, with verification drilling required in some areas where historical assays are not available. CD-002 confirms that the ECZ remains open and requires further drilling.

The 1990 Mason and Kerr targeting study stresses that testing the extension of this sequence to the east is a high priority exploration target, for the potential of a fourth centre of focussed copper-gold vein systems as part of a larger hydrothermal discharge field. CD-002 was drilled HQ to end of hole and intersected a 24.2m wide package of CTB stratigraphy with disseminated to stringer and breccia sulphides.

Rig 2 initially focused on the ECZ while Rig One’s DDH CD-001 was completed, providing the platform for the first Bore Hole EM survey targeting the zones of strong Cu-Au mineralisation historically drilled from surface and underground. There is some spatial variance in the exact position of these intersections, and with the precise position of the surface collars no longer visible on the two historical drill pads (and limited historical down-hole survey information). Bore Hole EM is being conducted as a vectoring tool to better orientate the surface program to more concentrated stringer to brecciated/stockwork sulphide concentrations within the SCZ. Once this zone’s program is completed the drill program will then proceed with a combination of twinning, infill and extension drilling on the program’s other known targets.