Mercedes rolls out new X-Class pickup, but don’t look for it at your dealership

Starting at approximately $56,000, the German automaker is pitching the truck as a hybrid that combines typical Mercedes luxury with the ruggedness of a pickup 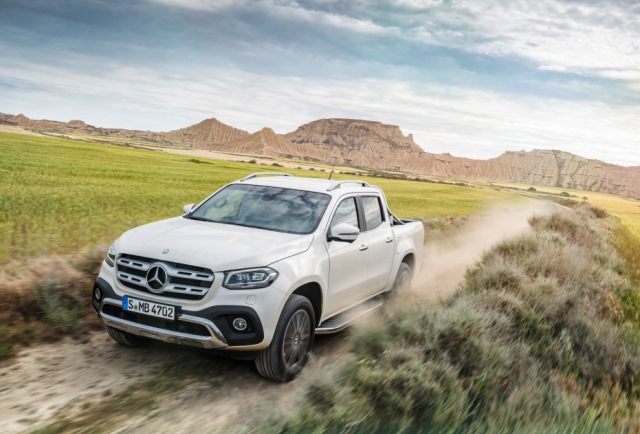 The vehicle will premiere in Europe this month, followed by Autralia, South Aftrica and South America. PHOTO: Daimler

STUTTGART, Germany—The latest entrant to the pickup truck market is poised to hit the streets this month.

Mercedes-Benz, which has until now abstained from the traditionally rugged segment, plans to release its new X-Class across Europe later this November. A release in South Africa and Australia will follow early next year, along with a premiere in the South American markets of Brazil and Argentina in 2019.

Would-be buyers in North America will be kept idling.

Daimler, Mercedes’ parent company, has been silent on a North American release and currently has no plans to bring the new pickup to Canada or the U.S., where the American automakers have a stranglehold on the consumer truck segment.

Elsewhere, the company it pitching the new vehicle as a hybrid that combines typical Mercedes luxury with conventional pickup functionality.

“The segment for mid-size pickups is ripe for a premium vehicle,” said Dieter Zetsche, chairman of Daimler’s board and head of Mercedes-Benz Cars. “With the X-Class we will open up this segment to new customer groups, just as we redefined the off-road segment with the M-Class more than 20 years ago.”

The first model to hit the market will be powered one of two 2.3-litre diesel engines, the stronger of which offers 190 horsepower, or a 165 HP gas engine. The higher torque top-of-the-line model will premiere midway through 2018 and offers a 258 HP diesel V6. Engageable all-wheel drive will also come standard.

Built in partnership with Renault-Nissan, the Mercedes pickup is being manufactured in Barcelona, Spain. Production for South America is expected to kick off at Renault’s plant in Cordoba, Argentina in 2019.