Trudeau met with CEOs in New York May 16, promoting Canada as a great place to do business. But NAFTA and Trans Mountain cast long shadows over the PM's trip 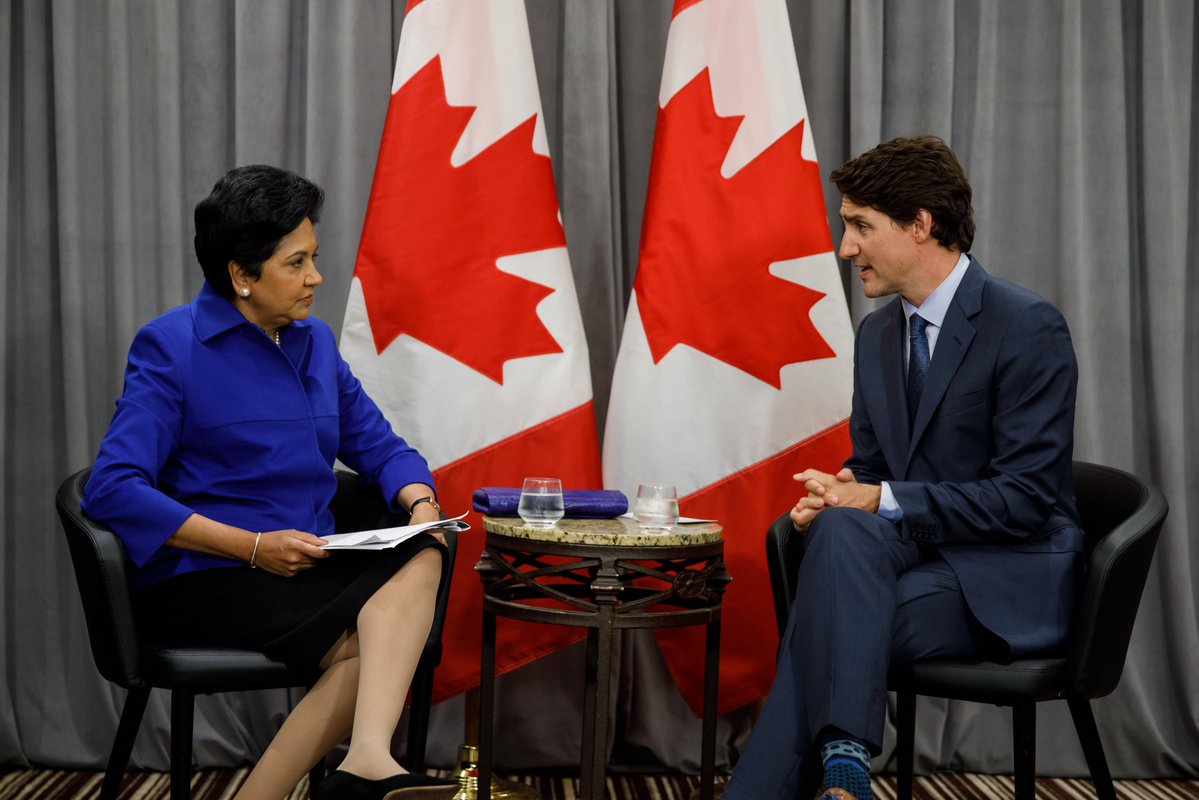 NEW YORK—Prime Minister Justin Trudeau will work the room at a business luncheon in Manhattan today on the merits of free trade and global economic co-operation, just as word starts to sink in that efforts to conclude NAFTA talks before the end of this week are likely to fail.

Trudeau will spend the second morning of his three-day U.S. tour—his 16th visit to the United States as prime minister—participating in what is billed as an “armchair discussion” on economics and international trade at the Economic Club of New York.

The trip is mainly focused on trade and drumming up investment for Canada, although Trudeau veered off that course Wednesday morning. During a speech at the New York University commencement at Yankee Stadium, the prime minister spoke at length on the merits of diversity and the risks of aggressive nationalism.

Looming over everything is the North American Free Trade Agreement and the expected failure of Canada, the U.S. and Mexico to meet an artificial deadline today, set to try and seal a new deal before the Mexican federal elections this summer or U.S. congressional elections in the fall throw new curveballs at the process.

Coupled with ongoing struggles to get the Trans Mountain pipeline expansion built, Canada’s ability to compete on the world stage and confidence in its ability to attract investment are currently flagged as questionable.

In a series of meetings with a lengthy list of international investment executives and U.S. CEOs Wednesday, Trudeau time and again tried to counter those fears, pushing Canada as a great place to do business. Most of those he met with publicly agreed.

None more so than Adam Neumann, the Israeli-born American billionaire who founded WeWork, which provides shared workspaces that include physical and virtual office space, health plans, and shared social networks to entrepreneurs, including start-ups.

“Amazing leader,” Neumann said, after spending about 20 minutes in a private meeting with Trudeau.

WeWork has five locations in Canada, with plans to expand to 11 by the end of this year and 45 by the end of 2020, Neumann said. He said his company is getting a lot of interest from Asian and Latin American companies who are interested in setting up shop in Canada using WeWork.

PepsiCo. Chair and CEO Indra Nooyi was also quite enthusiastic about Canada as a place to do business, noting her company—the second-largest food and beverage corporation in the world—does $4 billion worth of business in Canada each year.

“We are in Canada, for Canada, with Canada and from Canada, and the reason is because the government of Canada is an excellent partner for business,” she said.

Trudeau had another reason for sitting down with Nooyi this week, as he prepares to make ocean protection and eliminating plastic garbage a key initiative of the upcoming G7 leaders summit in Quebec next month. PepsiCo. is on board the plastics train, pledging last year to make sure 100 per cent of its packaging can be recycled or recovered by 2025.

Trudeau also met with the heads of advanced manufacturing giant Honeywell, online advertising software expert AppNexus, and Etsy board chair Fred Wilson, who sang Canada’s praises as a great place for tech investments because of government support for both research and development as well as high-skilled immigration.

Wilson’s comments fit in with Trudeau’s arguments in his commencement speech, against a type of politics that seeks to divide and conquer rather than unite and diversify, which many read as a direct rebuke of some of the policies of U.S. President Donald Trump.