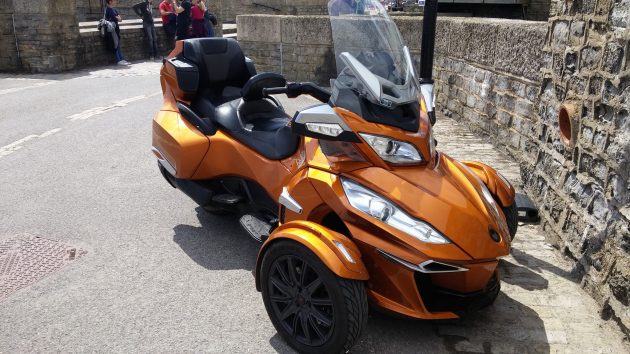 TORONTO – U.S. politicians will ratify the revised North American Free Trade Agreement despite threats that the continent could be left without any deal after President Donald Trump says he will withdraw from the existing trade pact, the head of BRP Inc. said Monday.

“Logic will prevail,” Jose Boisjoli said in an interview.

Some leading elected officials have expressed opposition to the U.S.-Mexico-Canada Agreement, known as USMCA.

Returning to pre-NAFTA trade policies would create uncertainty and deep negative consequences especially for the automotive industry should the revised trade agreement not be approved, he said after ringing the opening bell on the Toronto Stock Exchange.

The Quebec-based manufacturer of Ski-Doo, Sea-Doo and Spyder recreational vehicles is celebrating 15 years since being spun off from Bombardier Inc. and five years as a public company.

Related:
Out with the old: Trump to kill old NAFTA to push Congress to approve USMCA

Boisjoli said he’s happy with the new trade agreement even though he expects the company will face a $10-million hit next year from the need to increase domestic content on all-terrain vehicles made in the United States. Steel and aluminum tariffs are expected to add another $25 million.

“So far we are quite happy with the outcome because the impact for us will be minimal.”

He said USMCA will be a lot less damaging than the company and many investors once feared.

In order to be globally competitive, he said North America needs a low-cost manufacturing hub in Mexico to complement higher cost areas in Canada and the U.S., just like Europe has low-cost Eastern Europe and Asia has China and Thailand.

Bombardier Recreational Products has undergone a big change since the Bombardier family joined forces with Bain Capital and the Caisse de depot.

Its annual revenues have soared three-fold from $2 billion as it diversified from just seasonal snowmachines and personal watercraft by adding year-round products, including side-by-side vehicles, three-wheel Spyder motorcycles and boats.

It has added cheaper entry-level Sea-Doo Spark along with the Can-Am Spyder Ryker that’s expected to pave the way for a tripling of three-wheel sales in the next five years.

BRP now has eight product lines that are sold by 4,500 dealers in 127 countries and 11 factories in five countries and about 10,000 employees.

Boisjoli said the diversification should allow it to better weather the next economic recession compared to 2008-2009 when its revenues plummeted 25 per cent.

“We believe we have a very strong foundation for the future,” he said.

BRP expects to reach its five-year earnings target one year early and Boisjoli said he sees no reason why strong growth can’t continue when the next five-year plan is unveiled next fall.

Ultimately he said the company will likely add new products in the next decade and open manufacturing factories in Russia, Brazil and China.

Motorcycles could fit the bill for a new product, but it would have to be something very different with “its own DNA” than what’s currently available in the highly competitive sector.

The move towards electrification is inevitable once better energy systems are developed.

“It’s not if it will come, it’s when it will come,” Boisjoli said, adding its products have very little space for batteries and range anxiety needs to be tackled especially for those who use their vehicles in wooded areas.

Electric three-wheel vehicles make sense along with watercraft because many lakes no longer allow power engines and snowmachines for rental operators which cater to customers who drive short distances.

Several analysts recently cut their share price forecasts for BRP as macroeconomic concerns about an eventual recession weigh on its valuation.

“We believe BRP is better positioned to weather a slowdown than at any point in its history, but given the highly discretionary nature of its products, a recession would undoubtedly hit hard,” Mark Petrie of CIBC World Markets wrote in a note to clients.