Little results from first ministers meeting, but at least nobody stormed out

Trudeau and the premiers signed onto a final communique that was long on general statements about working collaboratively to create jobs, grow the economy and knock down barriers to trade between provinces 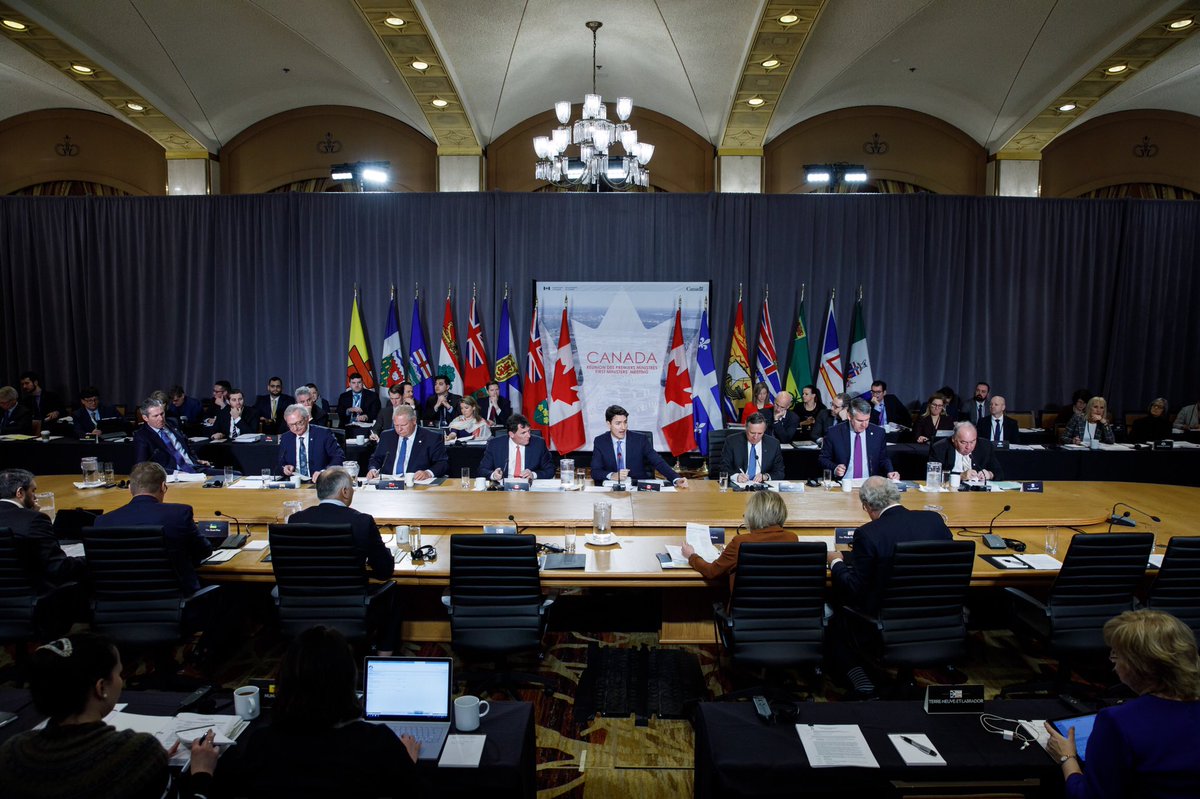 MONTREAL—Prime Minister Justin Trudeau managed to keep the peace at what began as a tension-filled first ministers meeting Friday but had few concrete achievements to show for the day-long gathering.

The one sour note was sounded by Ontario’s Progressive Conservative premier, Doug Ford, who accused Trudeau of moving the goalposts on Canada’s climate-change plans, requiring Ontario to cut its greenhouse-gas emissions more than Ford had expected.

But other premiers, including fellow Conservative Brian Pallister from Manitoba, disputed Ford’s interpretation of what the prime minister said behind closed doors in Montreal and Trudeau himself dismissed the charge.

Ford at least did not follow through on a threat to walk out of the meeting, which he had criticized for being too narrowly focused on Trudeau’s priority—reducing interprovincial trade barriers—and not enough on the priorities of provinces and territories.

Related: First ministers’ meeting likely to be most fractious, least productive for PM

Trudeau managed to mollify the premiers by letting them talk about whatever they wanted.

“Everything was discussed,” said Blaine Higgs, New Brunswick’s Conservative premier and the chair of the meeting from the premiers’ side. “I was encouraged by the kind of no-holds-barred discussion. That’s what we wanted and that’s what we got.”

Higgs, who had never attended a first ministers meeting before, said many of the others “said this was one of the most productive meetings they’ve been in for a long time.”

Trudeau and all the premiers, including Ford, signed onto a final communique that was long on general statements about working collaboratively to create jobs, grow the economy, protect the environment, reduce red tape and knock down barriers to trade between provinces.

After spending the biggest chunk of time discussing the oil-price crisis that is devastating Alberta’s energy industry, everyone agreed in the communique with Alberta Premier Rachel Notley’s call for federal investments in short-, medium- and long-term help to get her province’s oil and gas to ports for shipment overseas.

Alberta has been suffering from a glut of oil that has been trapped inland, away from buyers, because there hasn’t been enough transportation capacity to get it out. Customers have only been willing to take it at a steep discount to world prices.

The communique says all agreed the federal government should invest in short-term support for energy businesses hammered by the price differential for Alberta’s oil. The federal government should also invest in medium-term efforts to get energy products to market&—which Notley took as supporting her plan to buy tanker cars to move oil by rail—as well as long-term efforts to build the infrastructure, presumably pipelines, needed to get oil and gas to tidewater.

“I am pleased to say that the vast majority, if not all, supported what I had to say,” Notley said. “I am pleased that we were able to spend more time on the agenda talking about something that I think everyone understands is fundamentally important to the economic well-being of every Canadian.”

The communique acknowledged that while all first ministers agree on reducing carbon emissions, they disagree on how to go about it. Four conservative premiers—Ford, Saskatchewan’s Scott Moe, Higgs and Pallister—are going to court to challenge the federal plan to impose a price on carbon in their provinces starting in the new year.

Under the Paris agreement, the Trudeau government has agreed to reduce Canada’s greenhouse gas emissions by 30 per cent below 2005 levels by 2030. Ford said his plan will achieve emission reductions of 30 per cent in Ontario—without a carbon tax—but that the prime minister told premiers some provinces will have to do better than that.

“All of sudden, we have a little surprise in the room. The goalposts got changed,” he said.

Moe backed Ford’s version of events but Pallister said there was “nothing new” in what Trudeau said.

Federal officials pointed out that 30 per cent is a national target and that under the pan-Canadian climate change accord, provinces agreed to varying reductions to reach that goal. In any event, Nova Scotia Liberal Premier Stephen McNeil said all Trudeau said during the meeting was that some provinces will cut emissions more than others, not that they will be required to do so.

“On climate change, I think it’s clear that Premier Ford and I differ on the matter,” Trudeau said during a closing news conference. “I believe that we need to put a price on pollution … He believes we should make pollution free again.”

Ford’s recently unveiled climate-change plan is a “step backwards,” Trudeau said, noting that the Ontario premier has scrapped his province’s involvement in a cap-and-trade regime with Quebec and California.

“Even though the premier may want to play games with numbers, what is clear is we are going to move forward, as we always have, in a very consistent way and if anyone is moving the goalposts, it’s Premier Ford.”

Although Ford had been at the centre of demands to expand the agenda for the meeting, sources said neither he nor any member of his team was in the room when one of the issues he’d insisted upon—the influx of irregular border crossers—was discussed.

Despite some of the pre-meeting theatrics, sources, who were not authorized to speak publicly, also said Ford spoke only several times during the meeting and did not bother to use his translation device when French was spoken.

Among the few concrete results to emerge from the meeting, Moe said Trudeau committed to amending Bill C-69, legislation to beef up environmental assessments for energy projects. The bill has been heavily criticized for creating regulatory hurdles and uncertainty that will scare off investors in things like pipelines.

Trudeau would not specify what changes he’s willing to make but said there need to be “clearer and faster timelines so businesses can have certainty” and elimination of overlapping federal and provincial assessments. He noted that the bill is currently before the Senate and said he looks forward to any amendments the upper house may make.

A spokesman for the Canadian Chamber of Commerce said that while the group was happy to hear the government was willing to make changes to Bill C-69, it had hoped for more concrete action on issues affecting the oil and gas sector.

Phil Taylor said the premiers should have promised not to block interprovincial energy and infrastructure projects—such as pipelines—that originate outside of their jurisdiction.

On interprovincial trade barriers, the first ministers agreed to what the communique called “bold steps”—harmonizing standards in the trucking sector, including tire size and size and weight restrictions, and eliminating duplication in federal and provincial food safety regimes.

Pallister, who has been crusading to reduce internal trade barriers for years, was thrilled to finally see some modest progress.

“Each of these things on their own doesn’t sound like a big deal but they add up and there are literally hundreds and hundreds of these types of impediments to our ability to do business with each other and shouldn’t be there,” he said.