When asked by a Senate committee if Canada was a national security threat to the United States, Trump's trade czar replied "In the case of steel, yes" 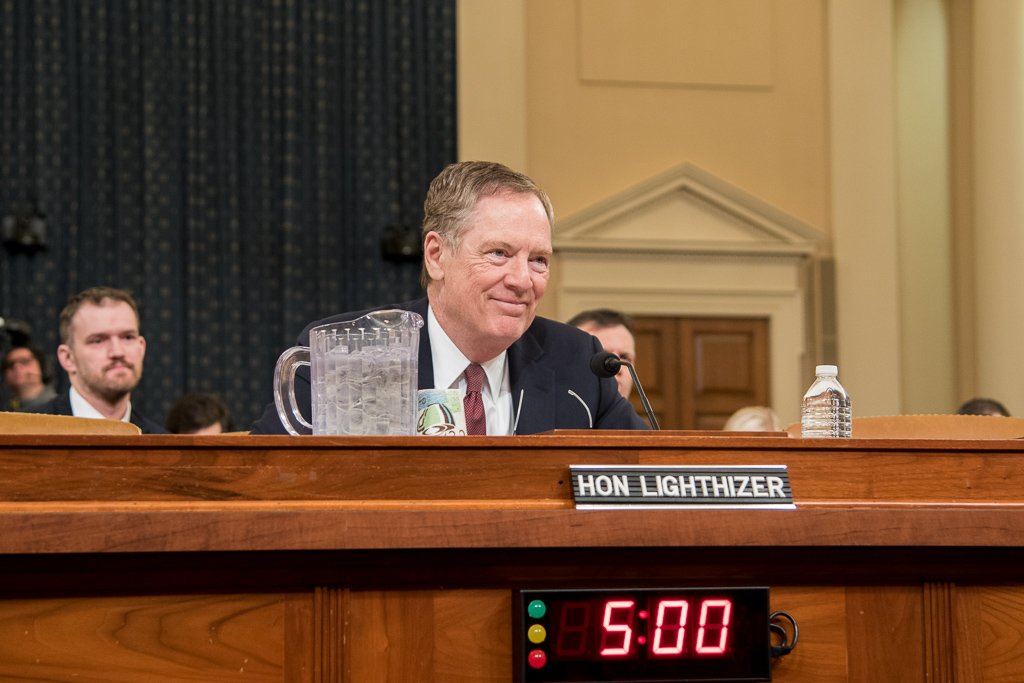 Lighthizer said the tariffs on steel and aluminum would be lifted if Canada, Mexico and the United States agreed to a new NAFTA. PHOTO: USTR/Twitter

OTTAWA—The Trump administration’s point man on trade called Canada a national security threat to the United States in the face of questions over steep tariffs on Canadian steel, and the American president doubled down on the decision in a campaign-style speech.

The White House’s decision to impose tariffs on steel and aluminum from Canada has triggered tit-for-tat tariffs as pressure builds to complete a renewed North American free trade pact.

U.S. trade representative Robert Lighthizer faced pointed questioning from a Senate committee Thursday about the decision, and at one point was asked directly if Canada was a national security threat to the United States.

Lighthizer couched his remarks by saying no one was declaring war on Canada, and called the country “one of America’s closest friends and trading partners.”

But the decision to impose tariffs was aimed at protecting the American steel industry, he said. If the Americans want to protect their domestic steel and aluminum industry, the administration can’t exempt one country like Canada and allow steel to flow through its borders and into the United States, Lighthizer said.

Canada added Thursday to a series of measures along its borders to prevent any trickling through of cheap steel from other countries into the United States.

Canadian officials have also adamantly rejected the argument that Canadian steel poses any kind of national security risk to the United States, pointing out that Canadian products are integral to the defence industry on both sides of the border.

Foreign Affairs Minister Chrystia Freeland said the protectionist measures have “the potential to be really devastating for the global economy” during a conference call with reporters Wednesday, and praised any move by the U.S. to back away from the tariffs.

Trump, however, showed no signs of backing down in the trade dispute as he stumped in the American Midwest, first with farmers in Iowa where he called Canada a “totally closed market” to agriculture products, and later with steelworkers in Illinois where Trump said he wouldn’t give any country a veto over the steel industry.

“America is fighting back and we’re winning.”

On Thursday, what Lighthizer heard from the U.S. Senate panel were concerns about the financial squeeze facing some businesses and industries in states stemming from the retaliatory tariffs imposed on a slew of American goods after Trump slapped tariffs on steel and aluminum from a host of countries including Canada.

Lighthizer said the tariffs on steel and aluminum would be lifted if Canada, Mexico and the United States agreed to a new North American Free Trade Agreement and suggested that negotiations on a renewed pact could be done next month “if everybody wants to get it done.”

NAFTA negotiations were paused in late spring because of the July 1 Mexican presidential election that saw Andres Manuel Lopez Obrador earn a decisive mandate. He assumes office in December.

In a letter to Trump earlier this month, Lopez Obrador called for quick talks between all three countries. Trump’s reply to Mexico said such a deal would help both countries, “but only if it can go quickly, because otherwise I must go a much different route.”

A number of issues remain unresolved, including U.S. demands for changes to rules of origin for automobiles, a five-year sunset clause and demands for Mexico to quickly hike wages.

The Liberals oppose the sunset clause, and Lighthizer was told there was opposition to the idea from within the president’s own party.

“There are a substantial number of Republicans, including me, who are not likely to vote for any new NAFTA agreement that includes a sunset clause because we don’t think it’s worth anything,” said Sen. Lamar Alexander from Tennessee.

Mexican negotiators and representatives from the outgoing and incoming president of that country are meeting with Lighthizer on Thursday afternoon in Washington, one day after meeting with a trio of Prime Minister Justin Trudeau’s cabinet ministers in Mexico.