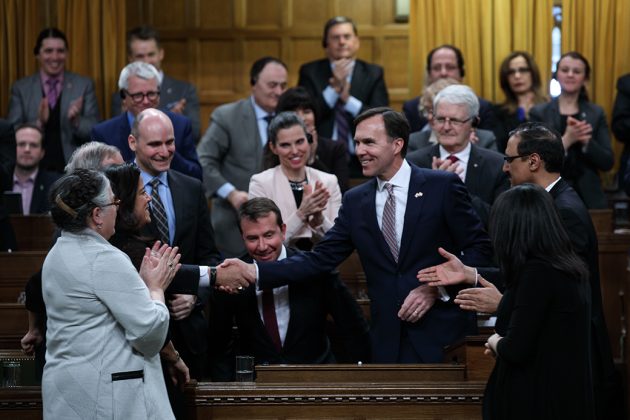 OTTAWA – The Liberal-dominated justice committee of the House of Commons pulled the plug Tuesday on its probe of the SNC-Lavalin affair, prompting fresh howls of opposition outrage and a walkout by Conservative MPs from the government’s budget presentation later in the day.

Trudeau accused the Conservatives of trying to avoid talking about the budget and their own “failed” approach to the economy – one he said is rooted in the 10 years of Tory government under Stephen Harper.

The real fireworks blew up when Finance Minister Bill Morneau prepared to unveil the Liberals’ pre-election budget later in the day. The Conservatives forced a vote on a motion to allow MPs on the fisheries committee to travel, on which a number of Tory MPs voted both for and against. They then rose, one by one, afterwards for apologize for voting twice, each managing to work in a denunciation of the Liberals’ refusal to recall former attorney general Jody Wilson-Raybould to the committee. “Let her speak” was the refrain.

Some points of privilege and points of order followed, eating up more time. Morneau finally started speaking at 5 p.m., an hour later than scheduled, but was drowned out by opposition MPs chanting, “Let her speak.” Commons Speaker Geoff Regan’s calls for order were not heeded. Conservative MPs eventually walked out of the Commons, after Scheer delivered a parting shot, calling the committee’s decision “an assault on democracy.”

The opposition’s anger reached a boil when Conservative and New Democrat MPs failed to persuade the Commons justice committee Tuesday morning to recall Wilson-Raybould so she could shed more light on the simmering SNC-Lavalin controversy.

The Liberal majority on the committee shut down the five-week inquiry during a closed-door meeting that opposition MPs wanted to be open. The Liberal members then presented a motion calling for the committee to begin a study of the rise of hate crimes in Canada.

Montreal-based SNC-Lavalin finds itself at the centre of a national political storm over allegations prime ministerial aides crossed a line in leaning on Wilson-Raybould to help the company avoid criminal prosecution on corruption charges.

Liberals on the justice committee wrote to the chairman, fellow Liberal Anthony Housefather, on Monday night to say the committee had done its job and should move on to other business.

“As committee members, we have achieved our objectives with respect to these meetings,” says the letter. “Following the testimony of all witnesses, we believe that all rules and laws were followed. Canadians now have the necessary information to arrive at a conclusion.”

Liberal committee member Randy Boissonault reiterated the contents of the letter following the meeting, saying Tuesday’s session was the 10th in five weeks, amounting to 13 hours of testimony given by 10 witnesses.

“We have heard from many of the key players in this matter,” he said.

The Liberals say the federal ethics commissioner, who has launched a probe of the SNC-Lavalin matter, is best suited to investigate the political controversy.

But the opposition would have none of it.

Conservative MP Lisa Raitt said the committee should hold town-hall meetings on SNC-Lavalin and hear from Canadians about the affair. And she said Wilson-Raybould should have the right to reply to other witnesses including Gerald Butts, Trudeau’s former principal secretary.

New Democrat MP Murray Rankin called it “yet another effort to change the channel” by the government.

SNC-Lavalin faces legal trouble over allegations it paid millions of dollars in bribes to obtain government business in Libya. The company unsuccessfully pressed the director of public prosecutions to negotiate a “remediation agreement,” a legal means of holding an organization to account for wrongdoing without a formal finding of guilt.

The director told SNC-Lavalin in October that negotiating a remediation agreement would be inappropriate in this particular case.

Wilson-Raybould has told the justice committee she was relentlessly pressured to ensure the Montreal engineering giant was invited to negotiate an agreement. She was shuffled from the justice portfolio in January, becoming veterans affairs minister. While she’s called the pressure “inappropriate,” she has also said she doesn’t believe anything illegal occurred.

Trudeau has denied that any undue pressure was placed on Wilson-Raybould.

She has testified at the justice committee for nearly four hours, but has indicated there is more to say, particularly about the period between her move to Veterans Affairs and her resignation from cabinet a month later.

Butts, once considered Trudeau’s right-hand man, quit his job as principal secretary, saying he did not want to be a distraction from the government’s agenda. In addition, Jane Philpott left cabinet over the government’s handling of the controversy.

The SNC-Lavalin affair claimed its fourth resignation Monday as Privy Council clerk Michael Wernick announced he will step down as the country’s top public servant, having concluded he’s lost the trust of opposition parties.