Last days of May? U.K. leader in peril as Brexit offer slammed 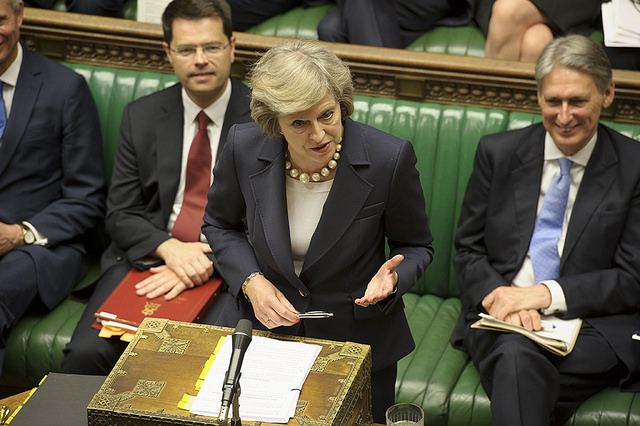 LONDON – British Prime Minister Theresa May was under pressure Wednesday to scrap a planned vote on her tattered Brexit blueprint – and to call an end to her embattled premiership – after her attempt at compromise got the thumbs-down from both her own Conservative Party and opposition lawmakers.

May plans to ask Parliament to vote next month on a bill implementing Britain’s departure from the European Union.

Lawmakers have already rejected May’s divorce deal with the EU three times, and Britain’s long-scheduled departure date of March 29 passed with the country still in the 28-nation bloc, almost three years after voters made the decision to leave.

In a last-ditch bid to secure support for her Brexit plan, May on Tuesday announced concessions including a promise to give Parliament a vote on whether to hold a new referendum on Britain’s EU membership.

But opposition Labour Party lawmakers dismissed the offer as too little too late, and pro-Brexit Conservatives accused her of capitulating to pro-EU demands.

May faces a torrid session of criticism from all sides when she defends her Brexit deal in the House of Commons on Wednesday.

Labour Brexit spokesman Keir Starmer said May should reconsider and come back with a better offer that promised a “close economic relationship” with the EU and a new referendum.

“The prime minister needs to, today, accept that what she announced yesterday isn’t going to work and pull the vote,” Starmer told the BBC.

Conservative lawmakers, meanwhile, were due to meet later Wednesday to discuss whether to attempt to topple May as party leader.

May has said she will announce a timetable for her departure once Parliament has voted on her Brexit bill. But with defeat of that bill looking highly likely, a growing number of Conservatives is pressing her to cancel the vote and quit even sooner.

May survived a no-confidence vote among Conservative lawmakers in December, leaving her safe from challenge for 12 months under party rules.

Lawmaker Nigel Evans said he would urge the party committee that oversees leadership contests to change the rules when it meets Wednesday so that May can face a new challenge within days.

“There is a growing discontent with the way Theresa May has handled this,” Evans said.

“Let’s have somebody who has a clean sheet and will be able to reboot the (Brexit) negotiations.”

Pressure on May is likely to increase when results come in from this week’s European Parliament elections, in which the Conservatives expect to receive a drubbing.

Many British voters on both sides of the Brexit debate look set to use the election to the EU legislature to express displeasure over the country’s political gridlock. Opinion polls show strong support for the single-issue Brexit Party – largely from angry former Conservative voters – and for pro-EU parties including the Liberal Democrats and the Greens.

The election is being held Thursday in Britain, but results won’t be announced until all 28 EU countries have finished voting late Sunday.

Environment Secretary Michael Gove would not confirm that the Brexit withdrawal bill would definitely be put to a vote the week of June 3, as May has promised.

“We will reflect over the course of the next few days on how people look at the proposition that has been put forward,” he said.


Related Stories
Contenders to be next U.K. leader divided over no deal Brexit
U.K.’s May tweaks Brexit deal in last ditch bid to win support [UPDATED]
Conservatives reject move to topple PM Theresa May, for now
U.K. concedes it must hold EU election amid Brexit delay