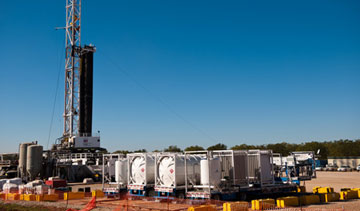 Thousands of temporary foreign workers are expected to be needed for many of the LNG projects in B.C. PHOTO Encana

OTTAWA—The federal labour minister was told earlier this year to give a positive signal to liquefied natural gas companies on the use of temporary foreign workers, but only if Canadians were considered first for jobs.

Labour Minister MaryAnn Mihychuk’s officials told her in February that it was inevitable that companies would need temporary foreign workers to proceed with energy projects in Western Canada.

In a Feb. 1 briefing note, Mihychuk’s officials write that the federal government can speed up how quickly it processes applications for temporary foreign workers, but couldn’t waive requirements for liquefied natural gas projects.

The briefing note, prepared ahead of Mihychuk’s meeting with David Keane, president of the BC LNG Alliance, recommends “signal support” for temporary foreign workers “on the condition that Canadians are considered first for available jobs … and only used as a measure of last resort.”

The Canadian Press obtained a copy of the briefing note under the Access to Information Act.

He didn’t want to speculate about what the message from department officials may mean for the fate of projects that require federal approval.

Thousands of temporary foreign workers are expected to be needed to work on any of the 20 separate liquefied natural gas projects being reviewed in British Columbia, including the Pacific Northwest LNG project that the federal cabinet has to decide on this fall.

The briefing note says unions are unlikely to speak out publicly about the use of temporary foreign workers because they know the majority of jobs will go to union members and that Canadians will be first in line for jobs.

Keane said the plan is to hire a workforce derived from local aboriginal communities and provincial residents before looking across Canada.