Canadian confidence that the economy will recover this year has also slipped a little, with those very confident of a rebound in 2021 falling 4 per cent since January. 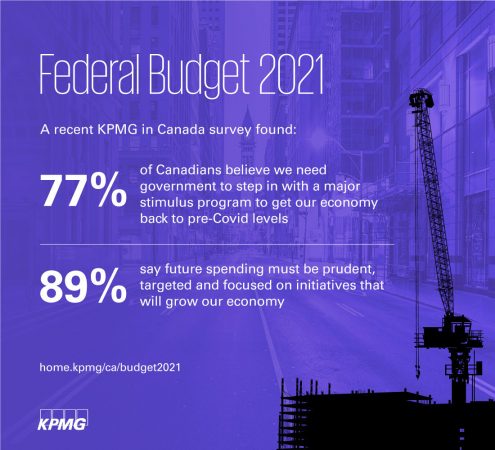 TORONTO — Canadians continue to support major stimulus to help kick-start the country’s economic recovery but want future government spending to be prudent, targeted and focused on initiatives that will grow our economy, finds a recent KPMG in Canada survey.

“The vast majority of Canadians want government to launch a major stimulus program to get our economy moving again,” says Mary Jo Fedy, National Leader, Enterprise, KPMG in Canada. “But they also want those investments centred around areas that will drive sustained health and prosperity in the country. The areas they would like targeted are, not surprisingly, healthcare and domestic manufacturing – two key sectors whose importance to the country was highlighted during the pandemic.”

93 per cent want government to create incentives to “buy Canadian” to restart our economy and ensure we build necessary domestic capacity to supply our critical needs, up 1 per cent.

Canadian confidence that the economy will recover this year has also slipped a little, with those very confident of a rebound in 2021 falling 4 per cent since January. But the recent ramp up in vaccine rollout has the nation more optimistic that we will see sustained growth in the latter half of the year.

While Canadians are optimistic that vaccines will get their lives and the economy back on track soon, one thing they are not ready for is a reopening of the border with the United States. Barely one quarter of Canadians said it is time to start thinking about resuming normal traffic between the two nations.