The US$2.1 million Koenigsegg Agera has beauty and brawn, but a car that moves this fast will test even the most capable drivers' nerves. Watch this video 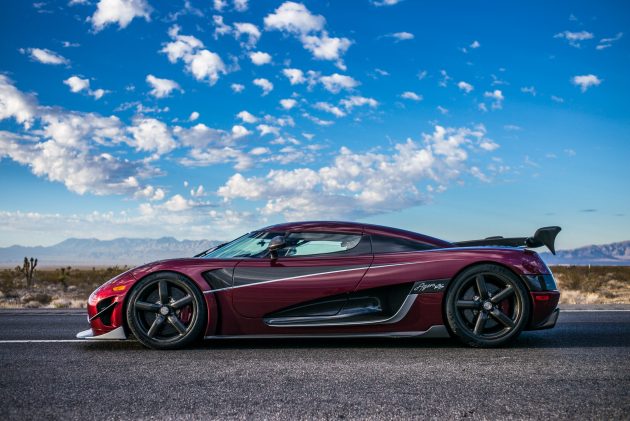 PAHRUMP, Nev.—Last weekend, Swedish super car company Koenigsegg shut down a stretch of Route 160 between Las Vegas and Pahrump, Nev. and set out to prove it has engineered the world’s fastest production car.

Over the course of two runs, the hand-built Agere RS acheived speeds beyond 440 kilometres-per-hour, and if you scroll down we have the hair-raising cockpit-view footage that catches the moment the driver hits “ludicrous speed.”

The RS1 is powered by Koenigsegg’s own twin-turbocharged 5.0l V8 engine. Developed and hand-built in Ängelholm, Sweden, this engine produces 1,360hp and 1,011 lb ft of torque.
Power is directed to the rear wheels via a 7-speed automatic transmission with output governed by Koenigsegg’s traction and stability control systems, which are engineered in-house along
with all engine management and active systems software.

The RS weighs just 3,075 lbs with a full tank of gas and ready to drive. A standard-issue Honda Accord sedan weighs in at 3443 lbs.

This extraordinary power-to-weight ratio allows the car to accelerate from 0-62mph (100km/h) in 2.8 seconds and on to 186mph (300 km/h) in 12.3 seconds. The car is also capable of cornering at up to 1.8G thanks to Koenigsegg’s elongated front and rear double wishbone suspension, active damping and advanced aerodynamics.

And, as if you didn’t already know, all Koenigseggs are equipped with a removable roof for instant open-top driving with no compromise in chassis stiffness or performance.

The test car is part of an exclusive series of just 25 Koenigsegg Agera RS vehicles. The series was fully subscribed as of January 2016, so if you’ve got US$2.1 million burning a hole in your pocket, you wil have to wait for the next production cycle.

Here’s the video. Put on your seat belt: