As the price of the technology decreases, fabricators stand to gain cost and time savings

Additive manufacturing (AM) is one of the most exciting and interesting technological advances we’ve seen in the manufacturing industry for a very long time. What’s even more interesting is how manufacturers are using this technology in their shop to make parts and turn a profit.

In many respects, the ability for a laser to create a finished part out of plastic has been around for a very long time. When I was with a machine tool distributor in the early ’90s, we began working with a manufacturer of stereo-lithography equipment—a process for creating 3D objects in which a computer-controlled laser builds up the required structure, layer by layer, from a liquid polymer that hardens on contact with laser light.

At the time, the machines were quite limited in capacity and speed. They could produce a plastic model that could fit on a chessboard, but it would take the better part of two days. A large capital cost was associated with these machines, upwards of $500,000, which made it difficult for many shops to justify the cost of what was essentially a plastic model-making machine. We did, however, manage to sell a few units to Tier 1 suppliers for the aerospace and automotive industries.

These shops were well-established machine outfits generating plastic models for prototypes, and they saved a lot of time and money in the design phase by not creating the parts out of metal first. This justified the cost of the machine.

Next-generation AM
Now here we are more than 20 years later, and I recently financed a package of used additive machines for a very good customer, coincidentally built by the same company we had represented all those years ago, but the cost of these machines are now a fraction of what they were.

Today the technology is referred to as rapid prototyping, which is loosely defined as a group of techniques used to quickly fabricate a scale model of a physical part or assembly using 3D CAD data.

The cost/benefit justification was an easy one for my customer. First, like for all new technologies, the cost of the machines, both new and used, has decreased dramatically. Next, the company was preparing to quote a job for a Tier 1 automotive supplier, and normally this includes the manufacture of a prototype part in metal. The manufacture and machining of a few different dies would cost at least $30,000.

By making the part using AM, my customer’s cost became just a few thousand dollars, and they can make as many changes as they need to get the part to its final design. This, in turn, is how to win business.

Buzz or boon
With all that said, that the only main difference between model-making machines and new industrial equipment is the latter’s ability to use metal powder and construct metal parts.

The cost for these metal additive machines, however, is significant—in most cases starting in excess of $600,000. We’re pretty much back to where we were in the ’90s with a new and exciting technology with a limited customer base. This customer must
generate enough revenue to justify pulling money from its working capital to buy outright, or have financial statements that are strong enough to get approved for financing.

So the question really becomes: who are the best types of customers for these machines, and what type of work are the machines best suited to manufacture? According to Mark Kirby, additive manufacturing business manager for Renishaw Canada, the ability of these machines can’t be measured by their capabilities because in reality the only limitation is their work envelope. 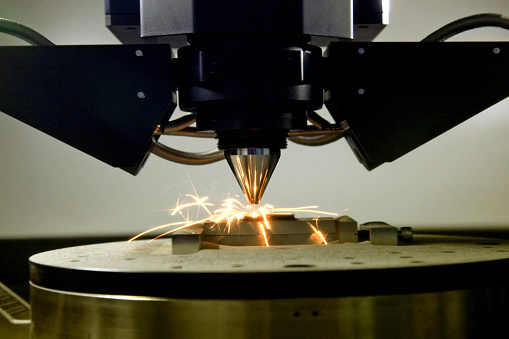 One of the uses of this new technology is design. An OEM or a company that purchases the equipment should have significant influence on part design. It also has to be open to creating parts outside of a conventional machine tool and traditional manufacturing methods.

AM in action
One of Renishaw’s customers recently used AM technology during the design of a new jet fuel regulator for a large aerospace engine manufacturer. The new additive technology ultimately allowed the design engineers to create a part that not only was stronger and had a longer lifespan, but was lighter, which led to higher performance with lower fuel consumption, said Kirby.

This application had the perfect confluence of factors that made it a great candidate for AM. First, the part required an internal passageway, which is a feature notoriously difficult to produce with a standard machine tool. Second, the manufacturer controlled the part design, and third, it had the financial ability to purchase the equipment. Most important, though, the manufacturer’s customer was fully prepared to purchase the part at a premium price.

All this put together justified the capital purchase. When I think about purchasing equipment, I always reflect on the first machinery auction I attended with my grandfather. He was bidding on an old machining centre, which I actually think was one he had originally sold new to a customer.

While he wasn’t the only interested party, the old man—known to be rather tight with a buck—kept on bidding until he got the machine. I even thought he was getting run up, but he never flinched. After the sale I asked him about it and he said something that I have never forgotten to this day. “Kenny,” he said, “the cost of the machine is only relevant when compared to what I can sell it for.” He then proceeded to pull out of his briefcase a purchase order, which had been negotiated prior to the auction. It was for about double what he had paid for the machine.

The lesson is this: There is no doubt investing in new equipment is a costly exercise, whether you’re using your own money or funds from your chosen lender. But what is often lost in the exercise is comparing the capital cost against the actual revenue you would then be capable of generating.

It is only then that an informed decision can be made as to whether the additive manufacturing equipment—or any other piece of new technology—is worth the cost.

Ken Hurwitz is senior account manager with Blue Chip Leasing Corporation, an equipment finance company in Toronto. Ken has years of experience in the machine tool industry and now works to help all types of manufacturers either source or tap into their own capital to optimize their operations. Contact Ken at (416) 614-5878 or at via email. Learn more at www.bluechipleasing.com

This column originally appeared in the October 2016 edition of Canadian Metalworking.

The article is part of the Financial Management Success Centre, showcasing strategies to access working capital, reduce costs, and leverage the value of shop floor equipment.