The report also raises concerns about the oil industry's increasing tendency to drill in water deeper than 1,000 metres 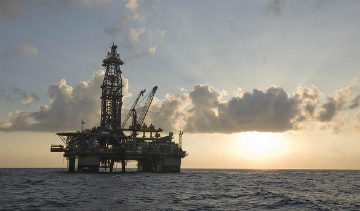 Carole Saindon, a spokeswoman for the federal Fisheries department, said government is working to address some of the gaps in response readiness identified in the report. PHOTO: Nexen Inc.

ST. JOHN’S, N.L.—An internal report warns the federal government isn’t fully prepared to respond in the event of an oil spill in the Arctic or in deep water offshore.

The document “An Emergency Response Biomonitoring Plan for Accidental Spills” dated May 23, 2014, was prepared for Fisheries and Oceans Canada. It was written by the consulting firm SL Ross Environmental Research Ltd. of Ottawa, and released under Access to Information laws.

“To date, there have not been any major spills related to offshore oil exploration in Canada’s Arctic, but should they occur they could pose some challenges for monitoring,” it says.

Knowledge of key marine species found in the region’s unique habitat, such as Arctic cod, is limited, says the report.

Marine research in the area is ongoing and should be regularly gathered and assessed to offer a baseline against which any potential oil exposure could be measured, it recommends.

The report also raises concerns about the oil industry’s increasing tendency to drill in 1,000 metres of water or more. Major spills at such depths create unpredictable plumes that can take days to surface.

“From a monitoring perspective, subsea dispersant injection into these deep, subsea blowouts poses a significant challenge as evidenced by the Gulf of Mexico spill in 2010,” it says.

“The behaviour of these subsea plumes is still poorly understood and will require extensive monitoring.”

The Deepwater Horizon explosion April 20, 2010 in the Gulf of Mexico killed 11 rig workers. An estimated 3.19 million barrels of oil spewed into the water before engineers could cap the blown-out well 87 days later.

Newfoundland and Labrador relies on offshore oil for about one-third of government revenues. Deepwater prospects in the Flemish Pass more than 1,200 metres down and 500 kilometres offshore are touted as the next frontier for the province, along with a role in possible Arctic exploration.

Carole Saindon, a spokeswoman for the federal Fisheries department, said government is working to address some of the gaps in response readiness identified in the report.

She said funding at Universite du Quebec is helping researchers study the effects of crude oil on blue mussels under ice cover. Federal scientists are also identifying ecologically and biologically significant areas in the Arctic, “an important step in assessing the state of Arctic marine ecosystems,” she said in an emailed statement.

The Canadian Coast Guard has trained oil spill managers across Canada, Saindon said. There are more than 80 equipment depots in total, including 22 in the Arctic with oil spill recovery containment and storage capacity, she added.

“Equipment can be cascaded from any depot across the country to respond to an incident.”

“Not a single oil company or government in the world has the expertise to drill in the Arctic safely,” she said from Toronto.

“We just have no proven track record that it can be done, and we have every indication that drilling in the Arctic is extremely risky, it’s extremely dangerous, not least because of the unpredictability of ice floes but also because you’re dealing with months of perpetual darkness in the winter.”

Potential production in the Arctic has been making regular headlines since the Obama administration in the U.S. gave a Shell subsidiary conditional approval in May to drill for oil in the Chukchi Sea off Alaska.

Royal Dutch Shell’s exploration rig, Kulluk, ran aground as it was being towed during a Gulf of Alaska storm in December 2012. A U.S. Coast Guard report on the accident blamed the company’s “inadequate assessment and management of risks” in icy, harsh conditions.

Khan said limited oil reserves in the pristine Arctic should be left intact.

“Is it really worth the risk? Why aren’t we instead putting our investment into renewable technologies rather than into an antiquated technology that we’re going to have to wean ourselves off of as a society?”