Moore, from British Columbia, cited balancing family obligations as the main reason for the decision 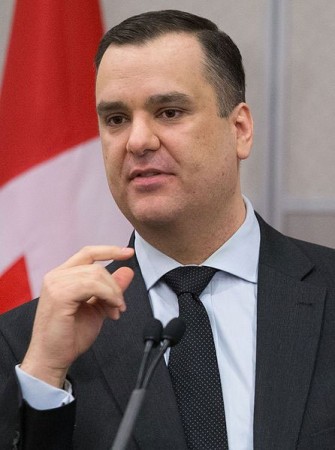 OTTAWA—Industry Minister James Moore is ending his 15-year career in politics and will not seek re-election.

He is the latest in a string of long-time Conservative MPs bowing out for this campaign.

Moore, from British Columbia, cited the health of his son as the motivation behind his decision not to stand for election this October.

“Balancing family responsibilities while in public life is always a challenge,” he said in a statement.

“This is particularly true when you have a child with special needs.”

Moore married Courtney Payne, a former adviser in the prime minister’s office, in 2011 and they have a son, Spencer, who has a form of skeletal dysplasia that requires extensive care.

The popular cabinet minister was first elected in 2000 and was among the earliest backers of Stephen Harper’s bid for leadership of the Canadian Alliance and later Conservative parties.

The prime minister was made aware of Moore’s decision weeks ago.

“I want to thank the prime minister for his friendship and support when I have needed it most,” Moore said.

Moore’s departure leaves the Conservative cabinet without one of its policy and political heavyweights headed into an election in which British Columbia is expected to be a key battleground.

Moore won his riding of Port Moody-Westwood-Port Coquitlam in the 2011 campaign with 56 per cent of the vote.

He was handed that portfolio in 2008 at a sensitive time for the Conservative government _ right after an election in which the Conservatives saw their support in Quebec plummet because of comments Harper made about the arts community.

At Heritage, the fluently bilingual Moore was responsible for repairing that damage and for a time after the 2011 election, Ottawa insiders joked he was the de facto sixth Conservative MP from Quebec.

As industry minister, he led the government’s decision to sell 73 million General Motors shares, which helped the Conservative balance the 2015 budget.

Moore has long been rumoured to have leadership aspirations and even among Harper’s inner circle is consider a potential successor to the prime minister.

In 2004, he was one of only a handful of Conservatives who voted in favour of same-sex marriage.

Moore’s departure follows an announcement by Justice Minister Peter MacKay earlier this month that he would not run again. Earlier this week, popular Alberta Conservative MP, James Rajotte, also declared he was standing aside.