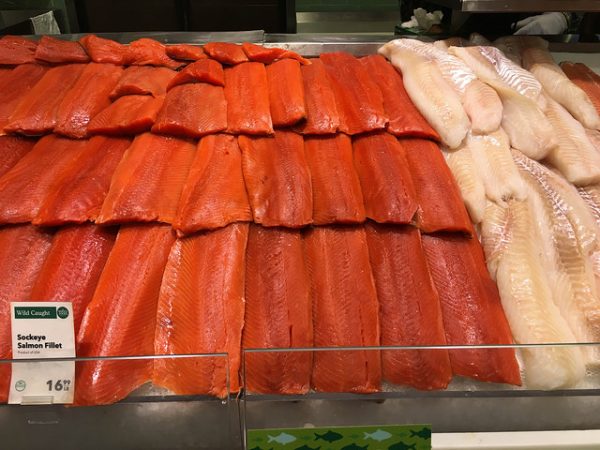 VICTORIA – A spill of diluted bitumen puts the survival of young salmon at risk even if the fish end up in clean water following exposure to the oil product, says new research from the University of Guelph.

Researchers said they made the conclusions after exposing four groups of sockeye salmon eggs to four different amounts of water soluble diluted bitumen and observed the young fish after the eggs hatched for up to eight months in clean water.

“We saw a lot of changes during the exposure,” said Sarah Alderman, a post-doctorate researcher at the University of Guelph’s department of integrative biology. “We found a whole suite of effects from delayed hatching to increased mortality, increased developmental deformities and changes in growth and energy stores in the fish.”

She said almost 50 per cent of the salmon exposed to the highest amount of bitumen died during the first two months after they were moved to clean water and observed for up to eight months.

“We found for about the first two months after moving them to clean water we had really high mortality even though they are not being exposed to the dilbit (diluted bitumen) anymore,” said Alderman. “We saw mortality as high as 50 per cent during that two-month period. Every day there’s more dead and more dead.”

The research was published this month in the peer-reviewed journal Aquatic Toxicology.

Alderman said the largest exposure amount of 100 micrograms per litre reflected the level of oil products measured along the shoreline of the Gulf of Mexico following the Deep Water Horizon spill in 2010.

She said mortality among the unexposed sockeye eggs was less than two per cent.

In the exposed fish, the researchers also found changes in brain development and overall performance levels in the young sockeye that survived the diluted bitumen exposure, said Alderman.

The results from the study come as federal and provincial governments, First Nations, environmental groups and energy companies are locked in a contentious debate over the environmental and economic viability of the proposed expansion of the Trans Mountain pipeline from northern Alberta to Burnaby, B.C.

In a recent decision overturning the approval of the pipeline expansion, the Federal Court of Appeal said the National Energy Board unjustifiably excluded the consideration of marine shipping of bitumen in its approval process. The court said the board failed to consider its obligations under the Species at Risk Act in relation to southern resident killer whales.

First Nations said during the energy board’s hearings that there were research and information gaps about a spill of diluted bitumen in a marine environment. The Federal Court ruling said there was nothing in the approval process that showed the government addressed those concerns.

Bitumen has the consistency of crumbling asphalt and doesn’t flow freely like oil. It needs to be diluted with another petroleum product to allow it to flow through pipelines.

The federal government agreed last June to buy the existing pipeline, the expansion project and terminals from Kinder Morgan Canada for $4.5 billion after the company threatened to walk away from the Trans Mountain expansion project in April.

Alderman said the exposure levels of diluted bitumen were modelled on prospective amounts from potential pipeline spills. She said the research points to the need to have clean up measures in place.

“There’s a lot of dilbit being transported in pipelines and most of it is transported very safely,” Alderman said. “But as this industry expands the potential for spills increases. We’re working to understand what to expect if it does happen.”

The Canadian Association of Petroleum Producers did not comment on the Guelph research, but in a statement it said it is part of a separate and ongoing independent study to “provide a better understanding of the behaviour of oil in the unlikely event of a spill on water.”

Last year, Alderman conducted research that concluded tiny amounts of diluted bitumen weakens the chances of migrating salmon to make it back to the rivers and streams of their birth to spawn.

Exposure to diluted bitumen hinders the swimming performance of salmon, causes their heart muscle to stiffen and damages their kidneys, her research found.

Alderman’s research is funded by the federal government’s National Contaminants Advisory Group, which is part of the Department of Fisheries and Oceans.