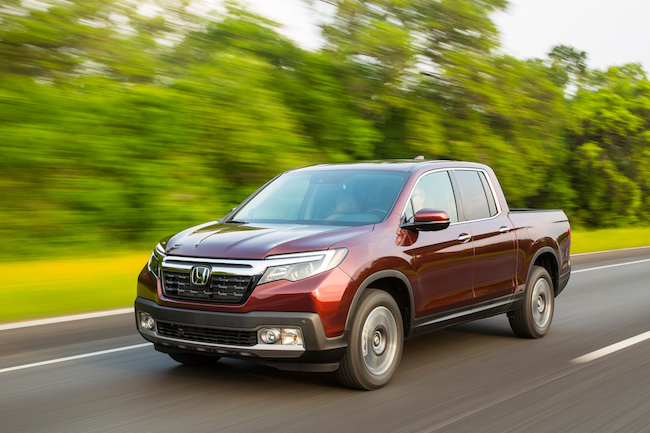 NEW YORK—After a more than two-year hiatus, Honda’s has brought its Ridgeline pickup truck back for 2017, and it’s bigger, more powerful and better looking than ever.

The previous Honda innovations are still there, like the all-composite bed that doesn’t need a bedliner and the tailgate that drops open in traditional style or swings to the side to make reaching into the bed easier. The lockable storage compartment built into the bed floor is still there, too.

But the new Ridgeline features some innovative features, as well, including an optional pickup bed-mounted audio system for tailgate parties.

Consumer Reports predicts that the Ridgeline will have average reliability. With a standard V-6 engine, it ties for first in fuel economy among 2016 and 2017 gasoline-powered pickups, including many that have four-cylinder engines.

The federal government’s combined city/highway rating for the new Ridgeline is 22 mpg, which is the same as it is for the 2016 Chevrolet Colorado and GMC Canyon equipped with smaller, four-cylinder engines.

The fuel mileage rating is for the new front-wheel drive Ridgeline. Honda didn’t offer two-wheel drive models during the Ridgeline’s first generation, which ran from the 2006 to 2014 model years.

Two-wheel drive models allow for a lower starting retail price. A base, 2017 Ridgeline RT with front-wheel drive has a starting manufacturer’s suggested retail price, including delivery charge, of $30,375. An all-wheel drive version starts at $32,175.

But the Ridgeline only comes in one body style—a crew cab with four doors and seats for five—and one, 5.3-foot pickup bed length.

Options can take the price up to more than $47,000 and include the latest safety advancements such as forward collision warning and lane departure warning as well as convenience features such as a moonroof and three-zone automatic climate control.

Shoppers can find lower-priced mid-size pickups, such as a base, rear-wheel drive, 2016 Chevrolet Colorado Crew Cab with 200-horsepower, four-cylinder engine for $26,420.

But pickups from traditional truck brands retain their body-on-frame construction, which doesn’t deliver a car-like ride.

The Ridgeline, by contrast, has unibody construction like that of a car or a modern SUV and rides smoothly, not jauntily.

In fact, both the Ridgeline’s front end and its V-6 come from Honda’s popular, large Pilot SUV.

The test-driven new Ridgeline rode pleasantly and comfortably on roads and trails. The body moved as one, not as separate pieces, over rough roads, and passengers weren’t roughed up or bounced around.

The interior, which looks more like an SUV’s than a truck’s, was quieter than expected.

Front and back-seat passengers relaxed with a bit more legroom—40.9 inches in front and 36.7 inches in back—than in earlier Ridgelines.

Simply put, this truck is easy and unintimidating to drive, unlike larger, traditional pickups.

The driver’s front and side sight lines are good, and while passengers sit up above the road, the ground clearance for the test-driven all-wheel drive Ridgeline was a reasonable 7.87 inches.

The electric power-assisted rack-and-pinion steering felt like a Honda SUV’s—light and responsive.

Power came on quickly and confidently and had an almost refined sound, compared to the more raucous exhaust note of competitors.

Still, while the power has increased, the maximum towing capacity remains at 5,000 pounds and lags behind its competitors.