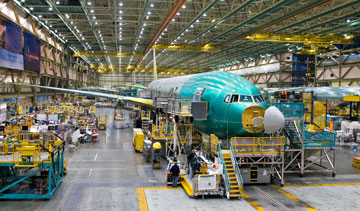 The landing gear contract is the Canadian company’s largest deal in its history. PHOTO Boeing

Making the short trip to Boeing from the Canadian aerospace company’s new final assembly facility in the northwestern state, the delivery coincided with the aviation industry’s largest event of the year taking place this week in Farnborough, U.K.

Three years in the making, Héroux-Devtek’s president and CEO, Gilles Labbé, said the delivery is a testament to the company’s ability to successfully produce large, complex landing gear systems for a major manufacturer.

“We are now at full speed in executing the largest contract in our history,” he said. “Our employees and suppliers are mobilized to flawlessly execute the production ramp-up phase in manufacturing the necessary components to meet Boeing assembly schedule.”

The company has made numerous investments in its operations since finalizing the major contract in 2013.

Sub-assembly work on the landing gear was carried out at the company’s facility in Strongsville, Ohio, while plants in Springfield, Ohio, Cambridge, Ont. and Laval, Que. manufactured a number of the complex components.

Héroux-Devtek says ongoing production of the landing gear remains on-schedule and that the company expects to continue meeting delivery expectations.