Graphene paint can be used by manufacturers in the shipping industry to reduce fuel consumption and CO2 emissions. 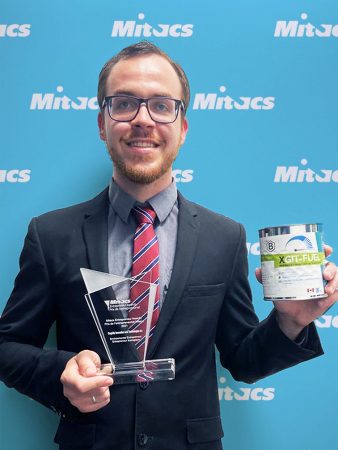 HALIFAX — Halifax-based Graphite Innovation and Technologies (GIT), will be presented with an award from Mitacs, for developing a new paint, using the nanoparticles of graphite &mdash called graphene — to achieve a more sustainable and strong performing marine coating in boat manufacturing and the shipping industry.

Marciel Gaier — a former Mitacs PhD researcher in Advanced Materials Science at Dalhousie University, and GIT Co-founder and CTO — will be presented with the Mitacs Environmental Entrepreneur Award on June 10 at a virtual awards ceremony.

The coating system, developed by Gaier and GIT Co-founder Mo AlGermozi, tackles pressing environmental challenges facing the global shipping industry, which is responsible for transporting roughly 80 per cent of the world’s goods. On the heels of international legislation banning the use of toxic compounds in ship coatings, GIT provides a low-VOC, non-toxic alternative that reduces the amount of greenhouse gases emitted per journey.

The company is also working on two other paints: XGIT-Fuel, which reduces fuel consumption and mitigates the damaging buildup of barnacles and algae on ship hulls, and XGIT-URN, which minimizes underwater radiated noise pollution, a very real threat to whales and other marine species. What sets both products apart in the industry is the use of nanoparticles, which have a larger surface area and yet a fraction of the weight of traditional versions of raw materials, meaning it takes a very small amount to achieve an effective coating, Gaier explained.

“Our goal is to solve the environmental issues facing the shipping industry, but we’re also helping to reduce overall costs at the same time,” said Gaier, noting that a ship with a heavy coating of slime can require up to 38 per cent more energy to maintain the same speed as a vessel with a clean hull. GIT’s coating creates a slippery surface so that any buildup is washed away as a ship moves through water, leading to less drag. If the vessels are not moving, the surface can be easily cleaned by modern techniques such as water pressure or mechanical brushes.

Last year, GIT was awarded a $2.4-million Transport Canada contract to pilot its prototype smart coating system on fishing boats, with a focus on reducing underwater noise and greenhouse gas emissions. The company is also leading Canada’s $4.6-million Ocean Supercluster project aimed at further developing its smart protective coatings, and recently launched a pilot program to engage 10 boat owners who will experience the benefits of the technology firsthand.

Despite the challenges of finding and recruiting top talent during COVID-19, GIT has grown from two to nine employees since launching in 2017 and aims to hire an additional five employees by the end of 2021 as it works to scale its product line.