Current version of the Equinox is partly assembled in Ontario, but is struggling against competitors with sales down 18 per cent this year 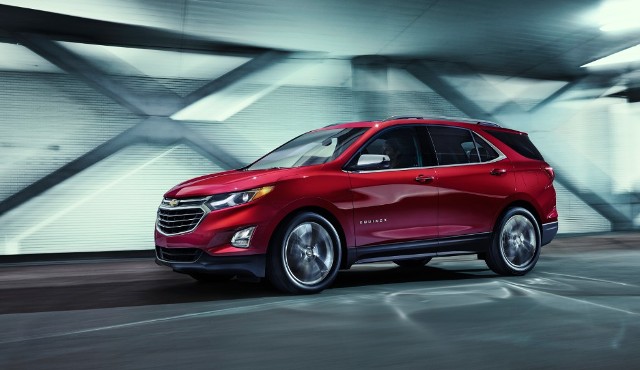 DETROIT—While sales of its main competitors are rising, the aging Chevrolet Equinox compact SUV has taken a dramatic tumble so far this year in the fastest-growing part of the U.S. market.

General Motors is hoping to turn that around when it replaces the Equinox with a revamped model that goes on sale early next year.

Its main competitors, the Honda CR-V, Toyota RAV4, Nissan Rogue and Ford Escape, all have seen sales increases through August, but Equinox sales are down almost 18 per cent. Some of that can be attributed to GM’s corporate cut in sales to rental car companies, but much of it is due to age of the SUV, which was last revamped in 2010. Newer models generally sell better, and most of its competitors are newer.

The Equinox is an important product for GM in what has become the biggest part of the U.S. market, where the company gets most of its sales and profits. Compact SUVs accounted for just 7.2 per cent of the U.S. market just a decade ago, but that has more than doubled to 16.5 per cent so far this year, according to the Edmunds.com automotive website. The SUVs appeal to just about all demographic groups, from aging baby boomers who are downsizing vehicles to millennials who like the high seating position and ability to haul outdoor gear.

The boxy old version of the Equinox, even in its late years, sold well but is starting to fade against the market leading CR-V and RAV4.

Edmunds Senior Analyst Jessica Caldwell says it will have to look less like an SUV in order to catch buyers who are now attached to Honda and Toyota entries. And even if it gains sales, the Equinox won’t be the newest in the market for very long. “Chances are your competitors are right behind you,” she said. “It’s tough.”

The timing is right for the new Equinox, said John Mendel, executive vice-president of Honda. “I don’t know that it’s going to be a quantum shift or some seismic event,” said Mendel, who hasn’t driven the new Equinox yet.

On Sept. 22 in Chicago, GM showed off the sculpted new 2018 version, which the company says borrows much of its looks from sleek new cars such as the Chevrolet Cruze and Malibu. The new Equinox is 400 pounds (180 kilograms) lighter, 5 inches (13 centimetres) shorter and about an inch (2.5 centimetres) lower than the old model. But it also has slightly less front and rear legroom, according to GM’s specifications.

Gone are the Equinox’s old 3.6-litre V6 and 2.4-litre four-cylinder engines, replaced by two smaller four-cylinder gas powerplants and a diesel, all turbocharged for better acceleration. The base 1.5-litre engine puts out 170 horsepower, while an upgraded 2-litre four cranks out 252. The base engine will get a GM-estimated 31 miles per gallon on the highway, the same as the outgoing model. But the 1.6-litre diesel will get an estimated 40 mpg on the highway, GM said.

“Customers can select an engine that offers more of the attributes that are important to them: efficiency, performance and capability,” said Dan Nicholson, GM’s vice-president of global propulsion systems.

The new version also comes with Apple CarPlay and Android Auto to integrate smart phones into the SUVs, and a host of safety features including low-speed automatic braking and an alert if you’ve left a child in the rear seat. Price and a specific sale date were not announced.