The track will support the testing of advanced General Motors vehicle software and technologies that will enable a future vision that is self-driven, electric, and highly connected. 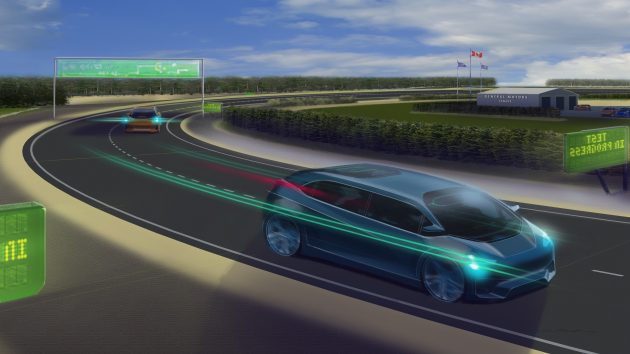 GM has converted part of the Oshawa Assembly Plant property into a test track for autonomous and advanced technology vehicles.

The CTC MATT’s oval-shaped design lends itself to continuous driving and four lanes with speeds ranging from 60-100 km/hour. The track will support the testing of advanced General Motors vehicle software and technologies that will enable a future vision that is self-driven, electric, and highly connected.

“Canada has become the ideal place for GM to expand its engineering work for the future – and the opening of the CTC McLaughlin Advanced Technology Track will take that work even further,” said Scott Bell, GM Canada president and managing director. “We’re excited for the next big step forward in advanced technology development and testing – right here in Oshawa.”

While the track is now operational internally, an official grand opening event with external audiences is being planned for early spring, pending COVID-19 restrictions.

In the meantime, the track will assist with the development and integration of software and hardware for advanced vehicle systems, including vehicle motion embedded controls, advanced driver assistance systems, autonomous vehicle systems, infotainment and advanced technology work.

The 55-acre operation on the southern-end of the Oshawa Operations expands GM’s Canadian technology footprint to four sites. With campuses in Markham and Oshawa and the Kapuskasing Proving Grounds in northern Ontario, the CTC has grown to become the largest software engineering and development centre for GM outside the U.S.

The CTC MATT’s multi-million-dollar investment was announced in May 2019, when GM invested C$170M in its Canadian operations.