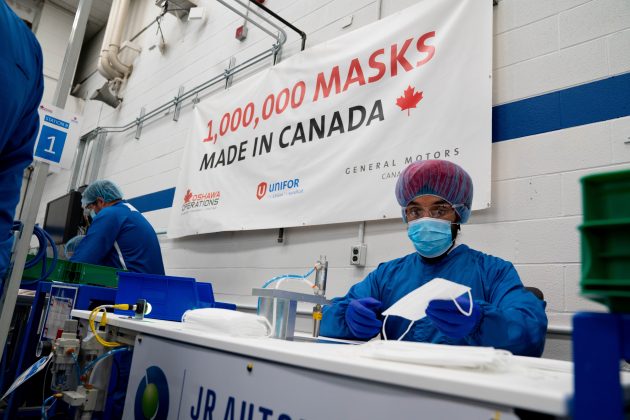 The automaker has been contracted to produce 10 million masks for the feds.

Minister Bains said in a statement marking the event, “GM Canada is one of the Canadian companies that have mobilized to develop made-in-Canada solutions to help our health care system. On behalf of the Government of Canada, I would like to thank GM Canada for joining the collective effort to fight COVID-19.”

Minister Anand shared a similar sentiment: “GM Canada’s production of 1 million face coverings is poised to make an important contribution to protecting the health and safety of Canadians.”

GM Canada received its Medical Device Establishment License on April 22, and in just over three weeks was able to source materials, build a clean room, install the required equipment, and recall and train 60 workers for two shifts of production at its Oshawa, Ont., plant.

The official start of production began on May 26.

David Paterson, vice-president of Corporate and Environmental Affairs at GM Canada, lauded his team for the speed at which this project got underway.

“The amazing thing for me is the speed at which our people were able to pull this together, and make sure that we’re able to do something that matters,” he said during a recent interview with Canadian Manufacturing. 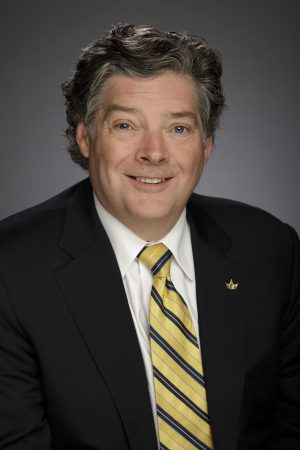 For Paterson, the initiative is uncharted waters. “We’re really good at making vehicles, but this is a new thing for us. I never thought I would see the day where General Motors had a licence for medical manufacturing, but we do now.” However, he noted that being a part of the COVID response is a historic opportunity. “In the manufacturing world, there are few times where you get almost a wartime experience where you can step up and literally do something that’s going to save people’s lives.”

Paterson noted that while N95 respirators, needed by healthcare professionals, make up about 5% of the masks Canada needs, “About 95% of what we need is for you and I to be able to go to the grocery store, to get in a taxi or use transit, and so the big volume requirement that Canada sees is for face coverings that when we put them on we’re protecting other people. That’s the kind of mask that we’re making.”

He continued, “The government wanted to increase domestic supply [of face masks] and indicated to us that this was the thing we could do that would be most helpful.”

The masks are modeled after a design being made at GM facility in Warren, Michigan, a project which began in mid-March and gave GM Canada the impetus to start its own initiative.

Paterson said, “We effectively took the masks we were already making in Warren and had them tested again in Canada so that we knew how they would do against various criteria. Health Canada was comfortable with that.”

The federal government is GM’s exclusive customer. “Given the volume of face masks, we wanted to make them work for front line workers anywhere in Canada … Health Canada will decide where to distribute the masks where they’re needed most,” Paterson said.

The masks are being made at cost, with GM providing its expertise and facilities for free and the feds covering the costs of machinery, materials and worker wages.

Paterson said, “It’s a great partnership and we look forward to continuing to work with all the different levels of government to keep Canadians safe.”