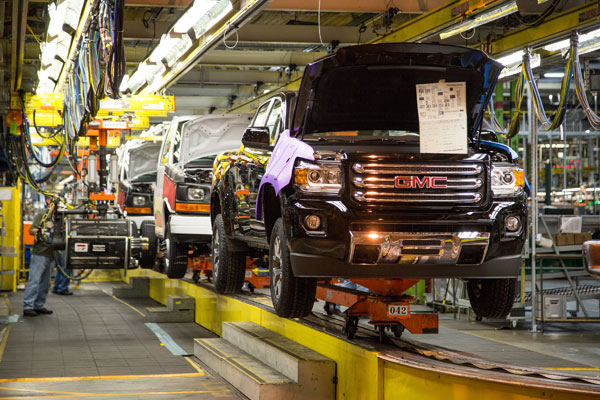 GM is adding 750 jobs at its assembly plant in Wentsville, Mo. PHOTO GM

DETROIT—Early demand is so high for General Motors Co.’s (GM) new small pickup trucks that the company is hiring more workers to build them even before one is sold to the public.

Nearly 100,000 prospective buyers have gone online to customize a Chevrolet Colorado or a GMC Canyon pickup and get a price.

That, and 30,000 advance orders from dealers, is a sign of strong demand, GM said this week.

GM plans to add 750 workers around March to staff a third shift at its plant in Wentzville, Mo., west of St. Louis.

The factory already employs 2,600 people who build the Colorado and Canyon as well as the Chevrolet Express and GMC Savana full-size vans.

Strong sales would justify GM’s gamble on a diminished part of the market.

In the 1990s, Americans bought more than one million small pickups every year, attracted by their lower prices, reasonable gas mileage and ability to haul light loads.

Then the bigger pickups, such as the Ford F-150, caught up in fuel economy.

Sales are down three per cent more so far this year.

GM stopped selling the Colorado and Canyon in 2012, and Ford Motor Co. halted sales of its Ranger small pickup in 2011.

In reviving the pickups, GM is aiming the Colorado at outdoorsy buyers on the coast, while the Canyon targets a more upscale clientele.

The company said 97,000 people have built and priced the trucks on a GM website.

That’s far higher than just before an average new vehicle is launched, and “shows pretty good intent (to buy) when they go right through the process to configure and price,” said Alan Batey, GM’s North America president.

The interest justifies hiring the new workers, he added.

Jesse Toprak, senior analyst for the Cars.com auto website, said GM has good reason to bring on the workers.

Big pickup sales grew nine per cent in August and are up five per cent for the year, Toprak said.

Indexes that measure small business confidence are at the highest since the Great Recession, and that normally translates to bigger truck sales, he said.

People in rural areas who don’t need to haul heavy loads like them, and drivers and businesses in big cities buy them because of their manoeuvrability and gas mileage, he said.

Trucks with a V6 engine will get an estimated 26 miles per gallon (mpg) on the highway.

The four-cylinder gas mileage hasn’t been announced, but it’s expected to be around 30 mpg highway.

Chevrolet’s full-size truck, the Silverado, gets up to 24 mpg on the highway.

The new workers at the Wentzville plant should earn around US$16 per hour to start, less than the US$28 per hour earned by longtime factory employees.

GM already has added about 1,300 jobs and invested US$513 million at Wentzville to build the new trucks.