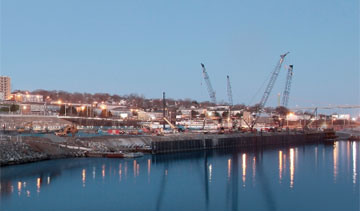 The industrial giant announced it shipped the ice- and cold weather-ready components to Irving Shipbuilding Inc.’s yard June 14, completing one part of its contract with the Halifax, N.S.-based firm leading the approximately $25 billion project.

According to the Canadian navy, the Arctic patrol ship’s propulsion systems will run on hybrid diesel/electric propulsion, using a pair of 4.5 megawatt main propulsion engines and four 3.6 MW generators.

As it ships the engines and generators, GE said it has begun acceptance testing on the first propulsion motor designed for the vessels. It expects to ship the component in early July. The company noted it is using Ontario steel skid and machining suppliers to complete the shipbuilding contract.

Under a seven-year agreement with Irving, GE will deliver and commission the electrical power and propulsion systems for six ice-capable Arctic patrol ships.