Freeland travels to Washington to talk tariffs, trade and terrorism

Freeland was set to advance talks on ratifying the new USMCA and lifting U.S. tariffs on steel and aluminum 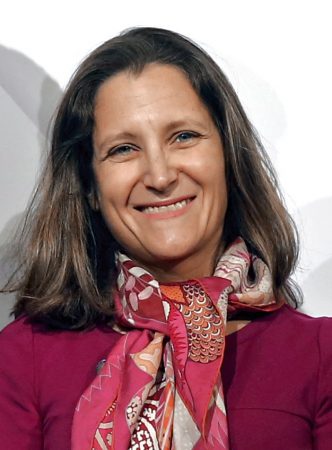 WASHINGTON – The U.S. will continue to lead the fight against Islamic State militants in the Middle East, Secretary of State Mike Pompeo insisted Wednesday – notwithstanding President Donald Trump’s apparent impatience to get American soldiers out of Syria.

Pompeo made the commitment as he kicked off the annual gathering of ministers, dignitaries and officials at the Global Coalition to Defeat ISIS, a 79-member group that includes Canada. Foreign Affairs Minister Chrystia Freeland was late to the party, missing the morning session and the midday group photo thanks to weather delays in Toronto.

“The drawdown of troops is essentially a tactical change – it is not a change in the mission,” Pompeo said in his opening remarks.

“It does not change the structure, design, or authorities on which the campaign has been based. It simply represents a new stage in an old fight. The drawdown will be well-co-ordinated, and our policy priorities in Syria remain unchanged.”

Trump, fresh from a state of the union speech in which he doubled down on pulling out of “endless wars,” addressed the group later in the day – a change in the schedule that appeared aimed at placating coalition members fearful that a U.S. withdrawal would spark a resurgence in the Islamic State, a group also variously known as ISIS, ISIL and Daesh.

Trump did not directly address the issue of troops coming home, but did claim the coalition has retaken virtually all of the territory once claimed by the Islamic State group to be part of its self-proclaimed caliphate.

“It should be formally announced sometime, probably next week, that we will have 100 per cent of the caliphate, but I want to wait for the official word,” he said, later warning that it would be impossible to completely scrub the Middle East free of extremism.

“You’re always going to have people; they’ll be around – they’re sick; they’re demented,” Trump said. “But you’re going to have them, no matter how well we do militarily. You can’t do better than we’ve done militarily, but you’ll have people that will be around. And we’ll search ’em out, and you’ll search ’em out, and we’ll find ’em, and hopefully they won’t be around very long.”

Freeland, who met later Wednesday on Capitol Hill with Sen. Jim Risch, an Idaho Republican, dodged a question about Trump’s claim of near-total success, but did acknowledge the fact that the coalition’s efforts are paying dividends.

“We, the coalition, are succeeding, and that is really good news,” she said. “Daesh has wreaked incredible havoc and pain on the people of Iraq and Syria … (but) as we all discussed today, including the president in his public remarks, the struggle is not over; there is a lot more to be done.”

Freeland was scheduled to meet separately Thursday with Lighthizer and with Sen. Chuck Grassley, the head of the Senate finance committee, to talk tariffs and trade – in particular the importance of ratifying the new U.S.-Mexico-Canada Agreement, and the economic imperative of convincing the Trump administration to lift its tariffs on steel and aluminum.

She continued to resist the notion that there is a link between the trade deal and the tariffs – a link some members of Congress have been actively trying to draw, despite the fact that the Trump administration has justified the so-called 232 tariffs on the grounds of national security.

“The point that we have made all along, and that we continue to make this week, is that that national security justification is absurd,” said Freeland. “Canada is a very close ally and security partner of the United States, as we saw in our participation in the anti-Daesh coalition today.”

Trump didn’t mention the metals tariffs Tuesday night, but he did urge the joint session of Congress to approve the agreement, which he billed as a vast improvement over the “historic trade blunder” of NAFTA.

“I hope you can pass the USMCA into law so we can bring back our manufacturing jobs in even greater numbers, expand American agriculture, protect intellectual property, and ensure that more cars are proudly stamped with our four beautiful words: ‘Made in the U.S.A.”’

A number of Democrats, as well as some Republicans, have expressed misgivings about the new agreement, in particular what Democrats say is a lack of enforcement tools for the deal’s labour and environment provisions. While some issues could be dealt with in the implementation bill on which members would vote, ratification is far from certain.

Some on Capitol Hill, including Texas Republican Kevin Brady, the ranking member on the House Ways and Means Committee, have suggested Congress may resist bringing the agreement to a vote unless and until the tariffs are lifted.