The new jobs are on top of 1,000 positions that Ford announced in October 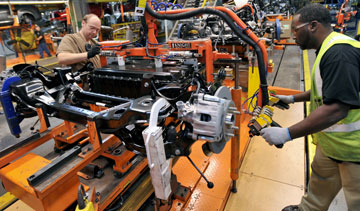 Ford will export the Edge to Western Europe for the first time. PHOTO Ford

OAKVILLE, Ont.—Ford Motor Co. says it will add 400 new jobs at its assembly plant in Oakville, Ont. where the new Ford Edge crossover SUV will be built for Canada, the United States and more than 100 other countries.

The new jobs are on top of 1,000 positions that Ford announced in October as the plant geared up to build the redesigned Edge with a $700 million investment in the plant, west of Toronto.

Ford says the redesigned Edge will go on sale this spring in Canada and the United States.

The company says global demand for utility vehicles is up 88 per cent since 2008 and they now account for 19 per cent of the global automotive market.

The company will export the Edge to Western Europe for the first time.

First opened in 1953, the Oakville assembly plant also produces the Ford Flex and the Lincoln MKT. It will also begin production of the 2016 Lincoln MKX this year. The facility has approximately 4,500 employees.