Assembly line workers can perform the same overhead action, such as tightening a bolt, up to a million times a year, leading to possible repetitive strain injuries 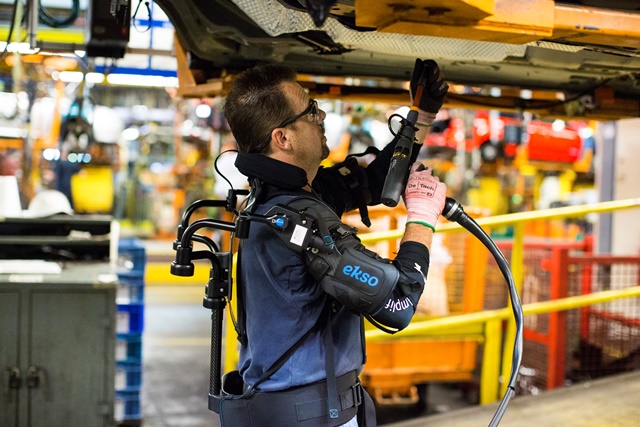 Ford has started piloting an exoskeleton vest designed to assist with lifting actions involving five to 15 pounds at two of its U.S. plants. PHOTO: Ford

DEARBORN, Mich.—With a metallic 9.5-pound unit strapped to their backs, workers at two of Ford Motor Co.’s American manufacturing plants are now something a little more than human.

One eye fixed on productivity and the other on worker health, the U.S. automaker has been piloting an exoskeleton technology designed to relieve stress on workers’ arms—specifically those who work on assembly line tasks that require them to lift tools over their heads.

The physical impact working overhead for brief periods is negligible, but for line workers, who need to perform the same overhead action hundreds or thousands of times each day, the effects add up. Over time, the possibility of fatigue or a repetitive strain injury increase substantially.

“My job entails working over my head, so when I get home my back, neck and shoulders usually hurt,” said Paul Collins, a worker at Ford’s Michigan Assembly Plant. “Since I started using the vest, I’m not as sore, and I have more energy to play with my grandsons when I get home.”

Made by California-based Ekso Bionics, the EksoVest helps support workers’ arms and between five to 15 pounds, usually in tools.

Ford has been piloting the technology is two of its U.S. plants and has now made plans to roll the unit out for further testing at sites in Europe and South America.

The company says it’s part of a wider ergonomic technology effort that has helped reduce employee lost time incident to an all time low.