MONTREAL—The 50-year-old Montreal Metro is finally getting some new digs.

The Bombardier Inc. and Alstom consortium tasked with manufacturing the next generation of Montreal subway cars has delivered the first vehicle for passenger testing. The new AZUR metro car sports larger doors, an eight per cent bump in passenger capacity, as well as better suspension—giving passengers on the iconic wheeled subway trains a smoother ride.

“We are very proud to take part in introducing AZUR métro cars into service today,” Montreal’s mayor, Denis Coderre, said. “This historic event will have a major, positive impact on everyone using our well-established public transit network. Once again, Montréal is demonstrating that it is a world leader in sustainable mobility.” 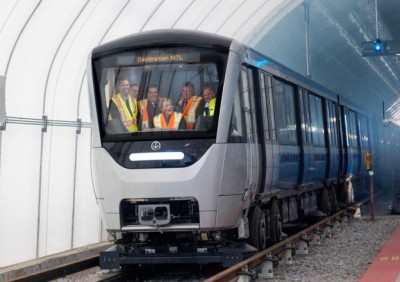 The first new train will enter service on the city’s Orange line, with crews monitoring its performance closely for the first two months. If all goes well following the initial testing phase, the Société de transport de Montréal (STM) plans to continue to roll out the new trains across its network for the next two years. The metro operator has ordered 51 trains comprised of 468 cars.

The project is creating work at more than 150 Canadian suppliers, and each train contains more than 60 per cent Canadian content. The Bombardier-Alstom consortium is expected to continue delivering new vehicles until 2018.

With Montreal subway passengers slated to get a smoother ride, Bombardier continues to navigate a bumpy road in Toronto, where transit riders are still waiting for the company to deliver a host of new streetcars. The Toronto Transit Commission said it would sue the Montreal-based company as a result of delivery delays last fall.