Moore noted he didn't like anyone interfering in American elections and he didn't want to interfere in Canada's. But he said he felt sad about Canadians' choices 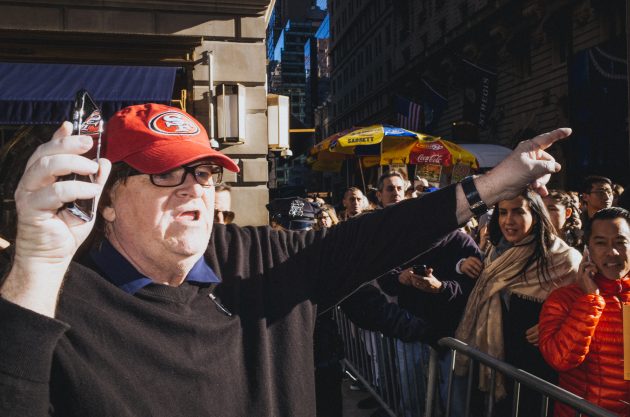 VANCOUVER—Michael Moore has been a fan of Canada ever since he mailed a VHS copy of his first documentary, “Roger & Me,” in a plain brown paper bag to the Vancouver International Film Festival and it went on to win a top prize.

So the filmmaker, who has long viewed America’s northern neighbour as a more decent, humanitarian version of his home country, says it was “crushing” to see photographs of Liberal Leader Justin Trudeau made up in blackface.

“We’re living with (President Donald) Trump and we look to the north with such envy. You don’t have to live with Trump. You have a man who greets refugees at the airport. You have someone who speaks with kindness and compassion. We don’t have any of that,” said Moore.

“So Trudeau, despite whatever flaws or problems there are with him, you only have to look south to see just how bad it could be.”

Moore was in Vancouver to attend a special event at the city’s film festival honouring the 30-year anniversary of “Roger & Me” on Saturday. In an interview Friday, Moore reflected on how the themes of the film still resonate in 2019 and offered his thoughts on the latest bombshells in American and Canadian politics.

Trudeau has apologized for wearing skin-darkening makeup in the 1990s and early 2000s, including on one instance where he was dressed like Aladdin. Trudeau has said although he didn’t think it was racist at the time, he now sees that it was.

Moore said his first thought when he saw the Trudeau photos was: “What is wrong with white people?”

“Whether it’s stealing black peoples’ music, whether it’s taking the best comedy—African-American comedians—you go down the whole list of things that are appropriated from people of colour and this is a long and sad tradition,” he said.

Moore noted he didn’t like anyone interfering in American elections and he didn’t want to interfere in Canada’s. But he said he felt sad about Canadians’ choices, even though the country does have the “NDP, which is rockin’ on as far as I’m concerned.”

“You have an election in a couple of weeks and you basically have a choice between Aladdin and an American. I think on balance, advantage Aladdin. Right?” he quipped, referencing the recent revelation that Conservative Leader Andrew Scheer is a dual U.S.-Canadian citizen.

Scheer has said he’s in the process of renouncing his American citizenship but Moore joked that the move wasn’t necessary.

“I think the best thing I can do while I’m here in Canada is escort Mr. Scheer back to his country and try to tell him to quit saying that word ‘renounce.’ … Don’t let Americans hear they’re being renounced. We can’t take it anymore. We’re going through enough already.”

The Vancouver International Film Festival was set to screen “Roger & Me” and host an on-stage discussion with Moore. The film chronicles Moore’s dogged efforts to interview General Motors CEO Roger Smith about the damage done in Flint, Mich., because of the company’s mass factory closures.

Flint is Moore’s hometown and he acknowledged sadly that the situation has gotten worse in the past three decades. The number of GM workers in the city has dwindled and the city’s cost-cutting measures led to tainted drinking water, he noted.

Michigan was among the states Trump visited during the 2016 campaign with promises to restore manufacturing jobs. Despite his vows, the Rust Belt is still losing jobs, with GM announcing plans last November to close five plants in the U.S. and Canada.

Moore said Trump “played” the working class in the Midwest.

“Trump did go into Michigan and Wisconsin and Pennsylvania and over and over again said, ‘I’m going to tax the rich. Those hedge fund guys, they’re not paying their fair share. I’m going to bring these jobs back.’

“If anybody would say that to people who have suffered in the Midwest, that’s going to sound good.”

Moore also wisecracked about the impeachment inquiry launched by the Democrats in the House of Representatives, pointing out Trump has openly told the media that he asked Ukraine to investigate Joe Biden and his son.

“Who needs an inquiry? What’s there to inquire? He did it. He admitted he did it. He has to be impeached.

“I tweeted last night that I just went downstairs to throw another load in the laundry and I came back up and he was still president. What’s going on here?”