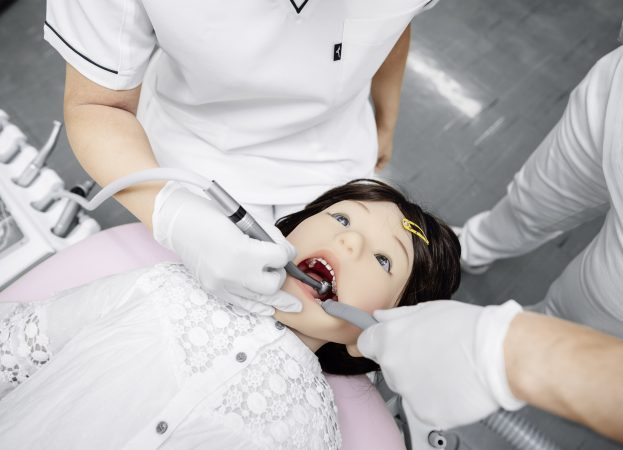 The Pedia Roid simulation robot for training dentists and dental assistants treating young children is based on piezo valve technology from Festo.

Tmsuk specializes in service robots, such as transport robots and personal care assistants for elderly people. These are equipped with electric axes. However, the dental simulation robot, named Pedia Roid, is pneumatically actuated, since the students and trainees sometimes have to hold the robotic dummy’s limbs during treatment simulations. This could damage the gear unit and spindles of electric drives. Pneumatics are more robust and flexible.

“We would not have been able to realize this humanoid robot without Festo’s piezo technology,” says Yusuke Ishii, Director of Tmsuk. The proportional pressure regulators VEAA/VEAB are 3/3-way valves, each of which combines a pressure sensor and electronic controls. Proportional valves with piezo technology require almost no energy consumption to maintain an active state due to their capacitive capability. Each valve operates like a capacitor: it needs energy only to charge the piezo ceramics; no further energy is needed to maintain that state. As a result, the valves do not heat up and consume up to 95% less energy than solenoid valves, which require an uninterrupted electrical current to function.

The design of Festo’s VEAA/VEAB valves makes them resistant to wear for a high cycle lifespan. They are ideal for pressure regulation in cylinders for low to very low air consumption applications, and as well as applications requiring a high dynamic response, such as the Pedia_Roid robot. The design of these proportional valves combines space-saving installation with a low intrinsic weight.