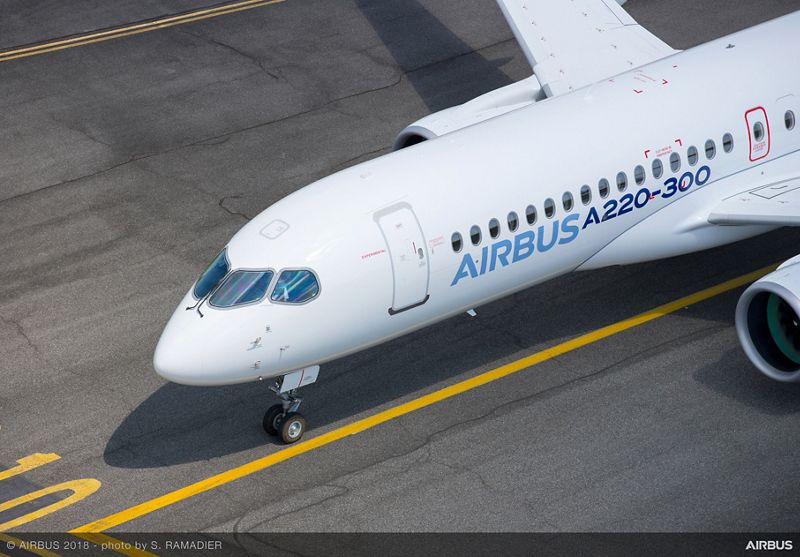 The Airbus A220-300 makes its first official appearance as a member of Airbus’ A220 Family of single-aisle jetliners at France’s Toulouse-Blagnac Airport.

DORVAL, Que.—Air Canada unveiled its first Airbus A220 jetliner on Wednesday, one of an eventual 45 it hopes will expand its grip on the North American market.

The narrow-body aircraft, whose maiden voyage takes off for Calgary from Montreal on Thursday, provides greater range and cost savings for Canada’s largest airline as it tries to shore up profit margins amid the ongoing grounding of the Boeing 737 Max.

The 137-seat A220 offers 20% more fuel efficiency than some Boeing 737 and Airbus jets, and will begin to replace planes like the Embraer E190 with 97 seats, said Craig Landry, Air Canada’s head of operations.

The order sports a list price of US$3.8 billion and makes Air Canada the second North American carrier to fly the A220, after Atlanta-based Delta Air Lines Inc.

The plane was called the C Series before Bombardier Inc. gave up a controlling stake in the aircraft program in 2018 to Europe-based Airbus SE, which christened it the A220.

Related: Bombardier shares plunge after it says it expects to fall short of guidance

The airliners will be built at what are now Airbus Canada’s facilities north of Montreal in Mirabel, Que., churning out 10 A220s per month at full production. Airbus also produces the planes at a new site in Mobile, Ala., mainly for U.S. customers.

Air Canada’s next two A220 deliveries are slated to run routes starting in May between Montreal and Seattle and between Toronto and San Jose, Calif., as it looks to build its presence in the U.S. and Canada while pushing back against rival WestJet Airlines Ltd.’s inroads in international markets.

Air Canada was slated to have 36 Max 8s by the end of 2019—one-quarter of its narrow-body fleet—with 14 more initially scheduled to arrive this year. The worldwide grounding of the Max last March following two deadly crashes within five months sent the company scrambling as it cancelled routes, made last-minute plane leases and absorbed higher fuel costs.

“In a sense, we already have contingency plans in place to try to cover that aircraft. This aircraft was really designed to take on new missions within Canada and between Canada and the U.S.,” Landry said in an interview.

He brushed off concerns about potential production delays, a nagging problem when the aircraft was under Bombardier’s roof.

“Working with a Canadian partner (Airbus Canada) allows us to have a lot of proximity and a lot of communication,” he said.

The hefty order also means consistent work for the 2,700 Airbus employees in Mirabel.

Chief executive Calin Rovinescu claimed partial credit for the survival of the C Series turned A220.

“The aircraft program almost did not make it,” the CEO told an audience of executives, managers and reporters at Air Canada’s hangar near the Montreal airport. “We’re pleased to have made a landmark order in 2016 which paved the way for major other airlines like Delta, like JetBlue, to follow suit.”

Saturated in the red lighting of Air Canada’s brand, the hangar held a fresh-off-the-line A220-300 that stretched beneath a video screen showcasing the destinations it might carry travellers to, from snow-clad forests to sun-kissed mountains.

On top of the 45 new narrow-bodies, Air Canada hopes to fold some 40 more aircraft into its fleet this year if its takeover of Transat AT wraps up by the second quarter following regulatory green lights.

Airbus Canada CEO Philippe Balducchi confirmed the A220s will not be affected by American tariffs against European imports, since the jets are assembled in Canada and the United States.

“The tariff situation for me is fairly crazy. We have an industry which…is based on free trade and free circulation of people and goods, so to have any tariff war starting is just beyond my understanding,” he said in an interview.

In October, President Donald Trump’s administration began to levy punitive tariffs on $7.5 billion worth of European Union goods after the World Trade Organization formally gave the go-ahead for the U.S. to impose the trade sanctions in retaliation for Airbus receiving illegal subsidies.

—With a file from The Associated Press.

Related Stories
Airbus delivers A220 jet to Delta, hoping to bring venture back to black
Airbus starts work on A220 assembly line six months after Bombardier sold jetliner
Bombardier’s C Series aircraft officially renamed A220 as it joins Airbus family
Airbus to expand production at plant on US Gulf Coast
Manufacturing In Focus