One in five of respondents said they wouldn't wait any longer than five minutes for their EV to charge at a non-home-based charging station. 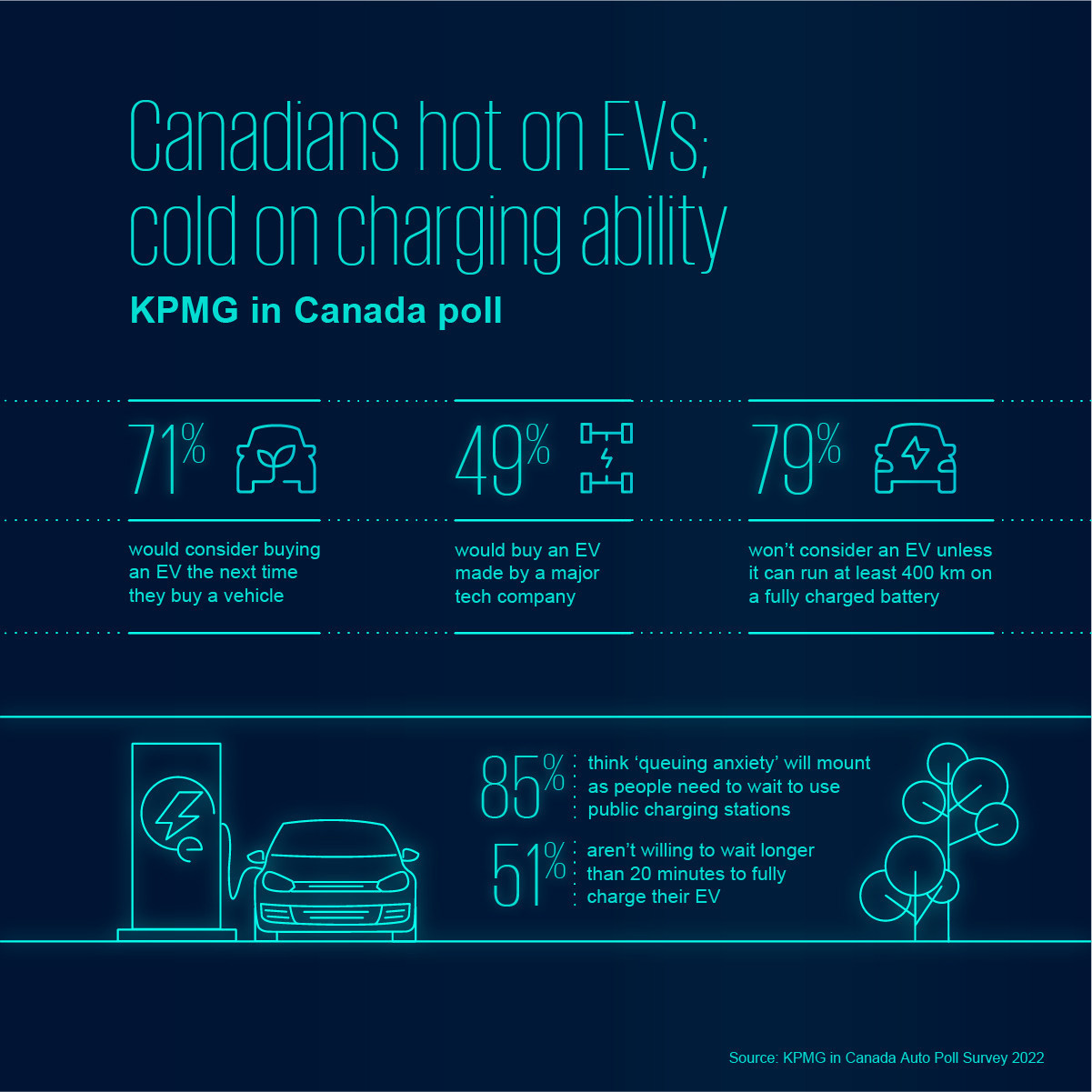 Canadians hot on electric vehicles but cold on the ability to get them charged, finds a new KPMG in Canada survey (CNW Group/KPMG LLP)

TORONTO — Almost three quarters of Canadians say they will consider an EV for their next purchase but concerns about driving range, battery performance and recharging times present a hindrance to full adoption, according to a research poll from KPMG.

The vast majority at 90 per cent say they need to do “a lot more research” to find the EV that’s right for them.

“We found that Canadians are ready to make the switch to electric, emission-free vehicles but they want to see improvements in infrastructure and trust battery technology in our climate before they fully commit,” said Peter Hatges, Partner and National Sector Leader, Automotive, KPMG in Canada in a statement.

“The mustang has left the barn. There is no turning back from the electrification of the automobile industry. As EV production revs up, the established automakers will need to pay close attention to consumer wants and needs. Our poll findings reveal brand loyalty isn’t as strong as automakers might think.”

Moreover, 77 per cent of consumers in British Columbia and 74 per cent in Ontario said that would consider purchasing an EV next time they’re shopping for a vehicle.

Three quarters of households with an annual income between $50,000 and $150, 000 have also stated they would consider purchasing an EV in the future.

Nearly four in five Canadians said they won’t consider an EV that doesn’t have a driving range of at least 400 kilometres, up from 77 per cent in last year’s survey.

64 per cent believe EVs aren’t reliable in Canada’s cold harsh winters, compared to 67 per cent a year ago.

One in five of respondents said they wouldn’t wait any longer than five minutes for their EV to charge at a non-home-based charging station.


Related Stories
Nearly 70 per cent of Canadians will purchase an electric car next: KPMG survey
Digital skills shortage, lack of skilled labour No. 1 issue for businesses according to KPMG Poll
Canadians are afraid to return to workplace, yet trust employers to keep them safe: KPMG
Most Canadians would sacrifice privacy to help stop COVID-19: KPMG