In addition to supplying RE Carbonate to Neo, Energy Fuels is also evaluating the potential to develop its own separation capabilities at its White Mesa Mill in Utah (U.S.), or nearby, and possibly adding metals, alloys, and rare earth permanent magnets manufacturing capabilities. 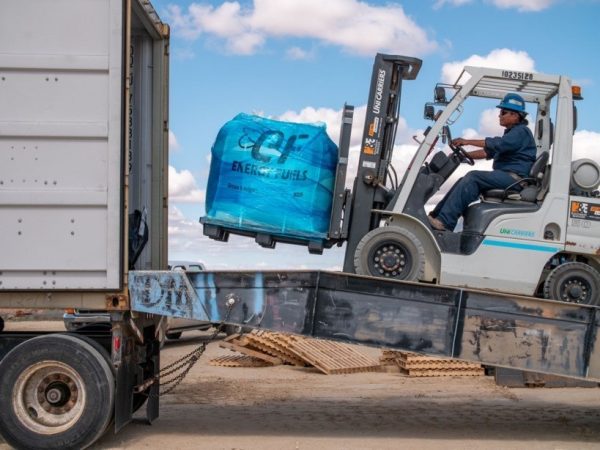 TORONTO and LAKEWOOD — Energy Fuels Inc. and Neo Performance Materials Inc. announces that the first container (approximately 20 tonnes of product) of an expected 15 containers of mixed rare earth carbonate (RE Carbonate) has been successfully produced by Energy Fuels at its White Mesa Mill in Utah (the Mill) and is en route to Neo’s rare earth separations facility in Estonia, creating a new United States-to-Europe rare earth supply chain. Additional shipments of RE Carbonate are expected as Energy Fuels continues to process natural monazite sand ore (Monazite) mined in Georgia (U.S.) by Chemours for both the rare earth elements and naturally occurring uranium that it contains.

Monazite, which is produced as a byproduct of existing heavy mineral sands mining, also contains naturally occurring uranium that Energy Fuels recovers for use in the generation of carbon-free nuclear energy.

This commercial-scale production of RE Carbonate by Energy Fuels from a U.S. mined rare earth resource positions Energy Fuels as the only company in North America that currently produces a Monazite-derived, enhanced rare earth material.

Energy Fuels and Neo also announced the signing of a definitive supply agreement by the companies’ respective affiliates. Under the Agreement, Colorado-based Energy Fuels will ship all or a portion of its RE Carbonate to Neo’s Silmet rare earth separations facility. Neo will then process Energy Fuels’ RE Carbonate into separated rare earth materials for use in rare earth permanent magnets and other rare earth-based advanced materials. Because of increasing demand for value-added rare earth materials in European manufacturing, Toronto-based Neo seeks to expand and diversify its current supplies of rare earth feedstock at Silmet, which is the only operational rare earth separations facility in Europe. Silmet has been separating rare earths into commercial value-added products for more than 50 years.

Representatives from both Energy Fuels and Neo were on hand at the White Mesa Mill to celebrate the launch of this new critical supply chain.

In addition to supplying RE Carbonate to Neo, Energy Fuels is also evaluating the potential to develop its own separation capabilities at its White Mesa Mill in Utah (U.S.), or nearby, and possibly adding metals, alloys, and rare earth permanent magnets manufacturing capabilities.