The SOLO Cargo EV has been engineered specifically for light commercial fleet and utility applications. 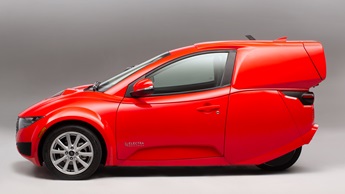 VANCOUVER — ElectraMeccanica Vehicles Corp., a designer and manufacturer of electric vehicles, announced the debut of the “cargo” version of its flagship three-wheeled, single-occupant, all-electric SOLO. The modified vehicle, dubbed the “SOLO Cargo EV,” is being unveiled at the Advanced Clean Transportation (ACT) Expo, the industry’s largest advanced transportation technology and clean fleet event and will be on display from August 31 through September 1, 2021 at the Long Beach Convention Center, in ElectraMeccanica’s Booth #1907.

The SOLO Cargo EV was developed based on direct input from prospective commercial and fleet customers and features an expanded cargo box in lieu of the retail version’s traditional hatchback. ElectraMeccanica is also the official sponsor of the “ACT Ride and Drive” event on September 1 and will be offering test drives of the SOLO EV for interested attendees.

The SOLO Cargo EV has been engineered specifically for light commercial fleet and utility applications. The vehicle is designed for single driver applications in urban environments, purportedly providing cost savings by virtue of its small three-wheeled footprint compared to standard, four-wheel trucks and vans but still providing a large-enough cargo space to fit a variety of use cases.

“We are continuing to transform the way people think about driving and how they interact in the world, especially when solo. Consumers will be able to use their SOLO to commute to work, go to the gym, visit their friends, or to get a cup of coffee,” said Paul Rivera, President and CEO of ElectraMeccanica. “Similarly, there are a wealth of light fleet, business, and commercial applications where single occupants dominate. From fast food franchise delivery and pizza delivery, to grocery delivery, small parcel and post, to tech repair and security firms, the SOLO Cargo EV is the ideal solution to help companies minimize operational costs and maximize efficiency.”

The SOLO Cargo EV has been modified to accommodate a wide variety of applications. The vehicle dimensions have been expanded to approximately 8 cubic ft. of cargo space. The vehicle is 53” tall and approximately 123” long. The interior and exterior wrapping of the SOLO Cargo EV can be customizable based on a customer’s needs. Additional third-party up-fitting options are available such as warming and cooling elements for food delivery, strobe lighting and customized lighting for municipalities and security, and locked boxes along with shelves and bins.

The SOLO Cargo EV has a range of 100 miles and a top speed of 80 mph, making it safe for highways. It also features front and rear crumple zones, side impact protection, roll bar, torque-limiting control, as well as power steering, power brakes, air conditioning and a Bluetooth entertainment system.